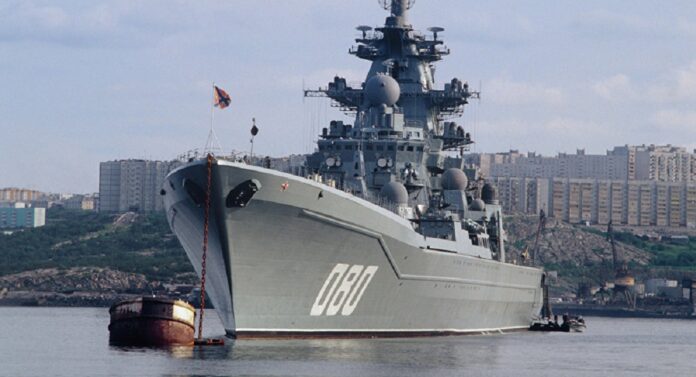 Russian TASS quotes Sevmash Shipyard Chief Mikhail Budnichenko as saying shipbuilders will deliver the Project 1144 heavy nuclear-powered missile-carrying cruiser Admiral Nakhimov to the Russian Navy in 2022 after its repairs and upgrade.
By now, hull works on the cruiser “have been completed and shipbuilders are loading systems and mechanisms onto it,” the Shipyard head said.

The heavy nuclear-powered missile-carrying cruiser Admiral Nakhimov was laid down on May 17, 1983. The cruiser was initially named the Kalinin. The warship was put afloat on April 25, 1986 and made operational in Russia’s Northern Fleet on December 30, 1988. The nuclear-powered cruiser was renamed into the Admiral Nakhimov on April 22, 1992.
The Admiral Nakhimov has been in the repair dock of the Sevmash Shipyard since 1999. Actual work on the cruiser’s repair and heavy upgrade began in 2013. After the repair and upgrade are over, the warship will get Kalibr-NK and Oniks cruise missiles and eventually Tsirkon hypersonic weapons.