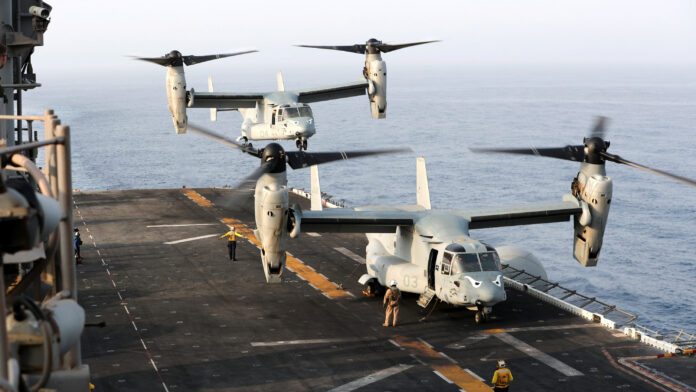 On 18th July, The USS Boxer Wasp-class amphibious assault ship of the United States Navy downed an Iranian drone in the Strait of Hormuz on Thursday in what US President Donald Trump described as a “defensive action.”

Shortly after, Iranian Foreign Minister Mohammad Javad Zarif told reporters he had no information about the incident so far.

Speaking to reporters at the White House, Trump said the US warship “took defensive action against an Iranian drone, which had closed into a very, very near distance, approximately 1,000 yards [914.4 meters].”

According to the US leader’s version of the incident, the Iranian unmanned aerial vehicle “ignored multiple calls to stand down and was threatening the safety of the ship and the ship’s crew.”

“This is the latest of many provocative and hostile actions by Iran against vessels operating in international waters. The United States reserves the right to defend our personnel, our facilities and interests,” the US president added.

He also called upon other nations to condemn Iran’s actions and to defend their ships in the region jointly with the United States.

Commenting on Trump’s words, Iranian Foreign Minister Mohammad Javad Zarif said: “We have no information about having lost a drone today.”

According to a statement attributed to chief Pentagon spokesman Jonathan Hoffman, the incident occurred at 10:00 local time (08:30 Moscow time) on Thursday, when the Boxer was passing through international waters.

“A fixed wing unmanned aerial system (UAS) approached Boxer and closed within a threatening range,” the statement reads. “The ship took defensive action against the UAS to ensure the safety of the ship and its crew.”

Tensions around Iran intensified after blasts and fires were reported on two oil tankers following a purported attack in the Gulf of Oman. The United States, backed by the United Kingdom and Saudi Arabia, blamed the incident on Iran. Tehran dismissed those accusations.

On June 20, the Iranian armed forces shot down a US-made RQ-4 Global Hawk spy drone. In the wake of this incident, the United States, according to President Donald Trump, had hammered out a military operation, including pinpoint strikes against three facilities on Iranian soil. Trump said he had called off the operation ten minutes before it was scheduled to begin, describing this as a disproportionate response to Tehran’s actions.

Iran’s Islamic Revolutionary Guard Corps (IRGC) will soon release photos of the USS Boxer taken by an unmanned aerial vehicle that the US claims to have downed, Iran’s Fars News Agency reported on 19th July, citing the Corps’ statement.

“We will soon release photos of the USS Boxer taken by the Islamic Revolutionary Guard Corps’ unmanned aerial vehicle,” the statement reads.

US President Donald Trump said earlier that the USS Boxer had downed an Iranian drone over the Strait of Hormuz, which was flying too close to the warship.

According to the Iranian Islamic Revolutionary Guard Corps, the photos will be released “to show the international community that the United States’ claims are baseless.” “The photos prove that the IRGC’s unmanned aerial vehicle had begun monitoring the area before the US navy ship entered the Strait of Hormuz. It wasn’t downed and safely returned to its base,” the statement pointed out.

Tensions around Iran started to escalate after two oil tankers had caught fire following an alleged attack in the Gulf of Oman on June 13. The US and Saudi Arabia blamed the incident on Iran, who denied all accusations. On June 20, Iran’s Islamic Revolutionary Guard Corps claimed to have downed a US drone over the country’s southern Hormozgan Province. US Central Command Spokesperson Bill Urban, in turn, said that the unmanned aerial vehicle had been flying in international airspace over the Strait of Hormuz. According to the media, following these developments, Trump approved military strikes against Iran but pulled back from launching them ten minutes before the operation was due to begin.

Rising tension shows itself on drone side, we call it as Drone Wars