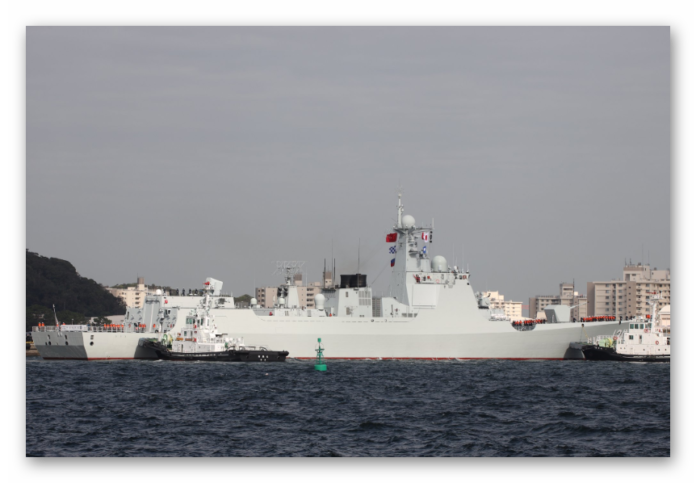 The Chinese People’s Liberation Army (PLA) Navy Type 052D guided-missile destroyer Taiyuan (131) arrived at Yokosuka port of Japan on 10th October in accordance with the international fleet review at the invitation of the Japan Maritime Self-Defense Force (JMSDF). She departed from the Zhoushan military port on 7th October.

This visit has a diplomatic importance because Chinese warships didn’t visit Japanese ports since 2007. After 12 years without a naval connection, China decided to send a destroyer to the activity hosted by JMDSF. Gong Yuanxin, deputy commander of the naval destroyer detachment under the Chinese People’s Liberation Army (PLA) Eastern Theater Command, said that the staff goes abroad on behalf of the PLA Navy as the nation celebrates the 70th anniversary of the founding of the People’s Republic of China. All service members will display high spirit, excellent military skills, and good image of the PLA sailors, and demonstrate the great achievements of the PLA naval modernization. Of course, this could be one of the reasons, but, making debut at such an international activity held in a rival country could be the result of an intention to weaken the coalition against them.

Every three or four years the JMSDF holds an international fleet review. This year the PLA Navy will make debut for this event, which will be held in the waters of Sagami Bay in Tokyo in mid-October. In addition to the JMSDF, more than 10 ships including from the US, the UK, India, Australia, Canada, Singapore, and other navies are planned to participate in the event.

During the event, representatives will conduct courtesy visits with each other. Besides, officers and soldiers will attend cultural exchanges such as open day activities, deck reception, and sports competitions, in order to further enhance mutual understanding and to improve peace and friendship.

The homegrown naval vessel Taiyuan (Hull 131) is a new type of guided-missile destroyer with a full displacement of more than 6,000 tons, which got commissioned and named in December 2018.