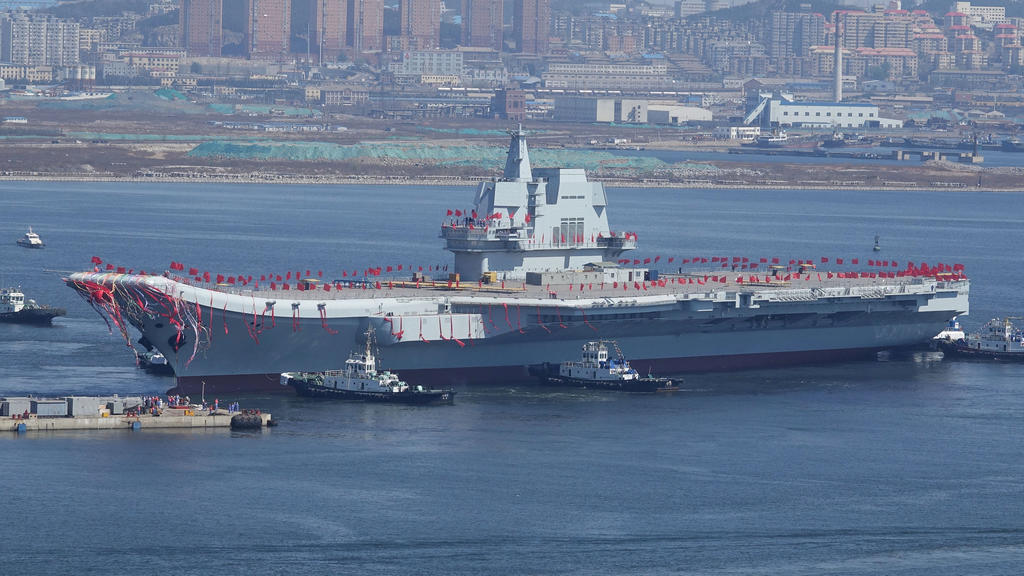 China’s first domestically designed and built aircraft carrier, the Type 001A, is expected to go into full service later this year.
China’s first home-built aircraft carrier, the Type 001A, will embark on her maiden sea voyage in the northeastern Bohai Sea later this month, sources close to the military said. “Beijing will arrange a celebration for the first sea trial because the Type 001A was the first aircraft carrier fully designed and produced by Chinese shipbuilders,” one of the sources told the South China Morning Post, adding the maiden trial was likely to be carried out just before the 69th anniversary of the founding of the PLA Navy on April 23. “The specific sea trial day will be decided by hydrological and tidal conditions, with a high tide level being the best criteria.” Recent online photos showed the carrier, which was launched on April 26 last year, with the scaffolding removed following outfitting work.
Last month, Liu Zheng, chairman of Dalian Shipbuilding Industry Corporation (DSIC), confirmed at sideline of the annual National People’s Congress that the Type 001A was ready for sea trials.
Another source close to the navy said the trial would test the ship’s basic functions, including power systems, damage control and radar and communication systems.
He said the navy was concerned it could suffer similar problems to the ones experienced by Britain’s £3.1 billion (S$5.71billion) carrier the HMS Queen Elizabeth, where a faulty seal was blamed for leaks on a trial late last year. “Unlike China’s first aircraft carrier, the Liaoning, which was refurbished from a Russian-made steel hull, the Type 001A was made using a special Chinese steel, which is a new cutting-edge shipbuilding technology that needs to be tested.