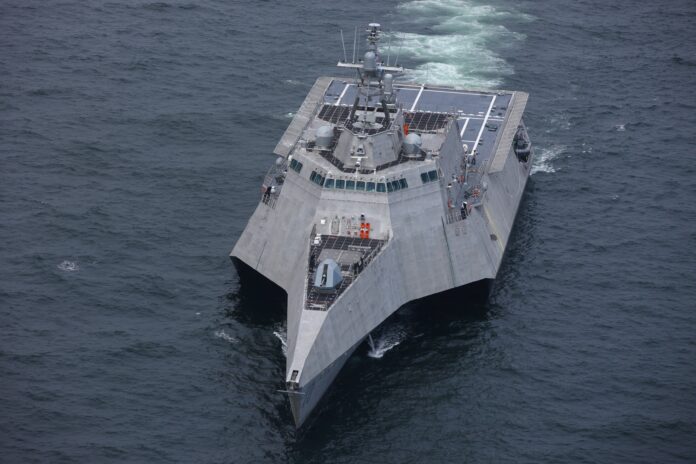 Austal’s Littoral Combat Ship Charleston (LCS 18) completes acceptance trials for the US Navy.
The completion of acceptance trials is the last major milestone required by the U.S. Navy before the ship is delivered and commissioned into service. The trial involves the execution of intensive and comprehensive tests by the Austal-led industry team to demonstrate to the U.S. Navy the successful operation of the ship’s major systems and equipment. “Austal USA delivered LCS 14 to the Navy at the end of February, LCS 16 at the end of April and will deliver Charleston in the next couple of months.  Moving these ships out to the fleet in such rapid succession is a huge accomplishment for our Mobile team and a testament to the supply chain supporting the LCS Program” CEO David Singleton said.
The LCS program is at a full rate production with several ships currently under construction. Cincinnati (LCS 20) is preparing for sea trials. Final assembly is well underway on Kansas City (LCS 22) and Oakland (LCS 24). Modules for Mobile (LCS 26) and Savannah (LCS 28) are under construction in the module manufacturing facility and Canberra (LCS 30) is in pre-production.