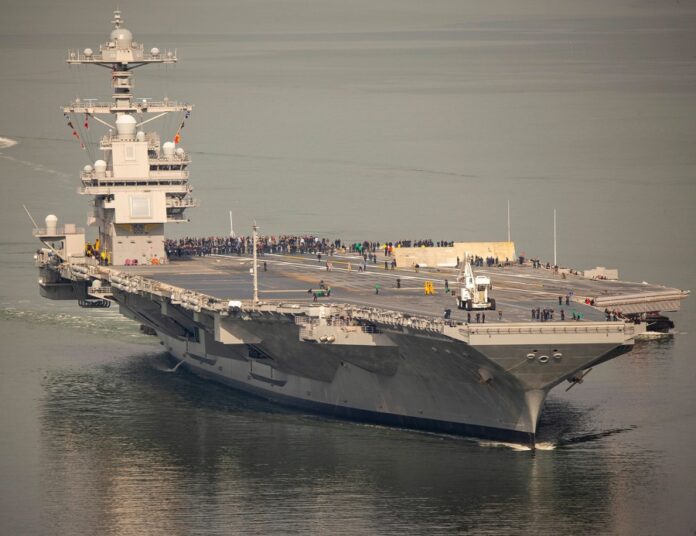 The year-long maintenance period for the bloody expensive aircraft carrier lasted 15 months, more than planned, as the service struggled problems with the ship’s nuclear propulsion plant, emergent work found during the repair period and challenges with the Advanced Weapons Elevators that emerged during the period at the Huntington Ingalls Industries shipyard. Four out of 11 elevators are now functional and certified, according to the Navy.

In the next sea trials phase, the crew of the ship and Huntington Ingalls Industries (HII) engineers will work together and shipyard employees to test the systems that were repaired at Newport News over the past year. The Navy describes it as an opportunity to “fully evaluate whether the work performed . . . was completed satisfactorily.”

For years, the Ford has faced setbacks, delays and cost overruns largely related to new its technology. The ship’s 11 weapons elevators, which are needed to load ordnance on planes, have been an ongoing problem. The U.S. Navy commissioned the ship in July 2017 without any working elevators. The ship’s electromagnetic catapult system for launching aircraft has also faced issues.

Each ship in the new class will save more than $4 billion in total ownership costs during its 50-year service life, compared to the Nimitz-class. The CVN 78 is designed to operate effectively with nearly 700 fewer crew members than a CVN 68-class ship. Improvements in the ship design will allow the embarked air wing to operate with approximately 400 fewer personnel. New technologies and ship design features are expected to reduce watch standing and maintenance workload for the crew. Gerald R. Ford is the first aircraft carrier designed with all electric utilities, eliminating steam service lines from the ship, reducing maintenance requirements and improving corrosion control.