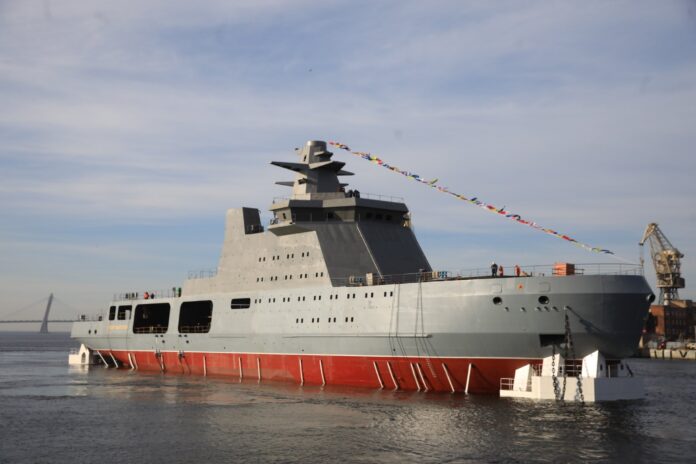 The lead vessel of a new class of Russian “ice-rated warships”, the 8,500-ton ‘Ivan Papanin’, has been launched in St. Petersburg. After being commissioned she will be a big part of Russia’s interests in the Arctic region.

This promising addition to Russia’s Arctic military arsenal was launched on Friday at the port city’s Admiralty Shipyard. She is of a newer design created for the Russian Navy and is, in her role and size, roughly a counterpart to the Norwegian Coast Guard’s ship ‘Svalbard.’

Construction the ‘Ivan Papanin’ began in April 2017 and the she is expected to be commissioned around 2022 or 2023. The 114-meter-long warship can be used not only as a patrol ship but also as a tug for other vessels though she is an icebreaker. Her hull is strong enough to deal with ice up to 50cm thick.

Unlike other icebreakers, this ship will be strongly armed like any other missile ship. She will be armed with Kalibr cruise missiles and a 76.2 mm naval gun., and also boasts a helipad, with a hangar for a reconnaissance helicopter and bays for two Raptor-class speedboats. It has a capacity for 50 mission crew, in addition to the sailors and officers manning the ship herself, and has an endurance of 60 days, with a range of 6,000 nautical miles.

The Russian military plans to use the multipurpose ship for patrols of its Arctic waters. Intercepted violators can be towed to port for detention with no external help. The ‘Ivan Papanin’ may also serve as a transport ship for sensitive military cargos or as a support ship in a battle group.

The launch of the Ivan Papanin comes amid Russia’s rapid military and economic development in its strategic Arctic region. Earlier this month, over 12,000 troops took part in nuclear war drills across Russia’s Arctic. Russia has also said it obtained new data that supports its territorial claims in the Arctic.

According to Viktor Cherkov, an admiral at the state-owned United Shipbuilding Corporation responsible for the ship’s construction, the Ivan Papanin is “unique” for its versatility and will able to perform the tasks of a tugboat and patrol ship in addition to its role as an icebreaker.