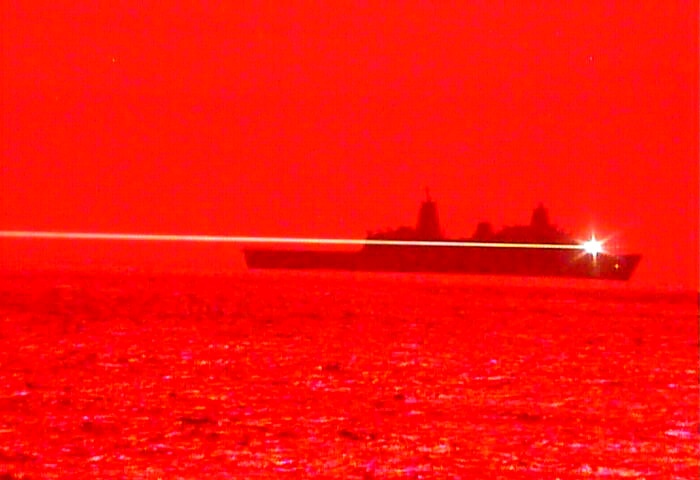 LWSD is a high-energy laser weapon system demonstrator developed by the U.S. Office of Naval Research and installed on Portland for an at-sea demonstration. LWSD’s operational employment on a Pacific Fleet ship is the first system-level implementation of a high-energy class solid-state laser. The laser system was developed by Northrup Grumman, with full System and Ship Integration and Testing led by NSWC Dahlgren and Port Hueneme.

“By conducting advanced at sea tests against UAVs and small craft, we will gain valuable information on the capabilities of the Solid State Laser Weapons System Demonstrator against potential threats,” said Capt. Karrey Sanders, commanding officer of USS Portland.

The U.S. Navy has been developing directed-energy weapons (DEWs), to include lasers, since the 1960s. DEWs are defined as electromagnetic systems capable of converting chemical or electrical energy to radiated energy and focusing it on a target, resulting in physical damage that degrades, neutralizes, defeats, or destroys an adversarial capability.

Navy ships face an increasing number of threats in conducting their missions, including UAVs, armed small boats, and adversary intelligence, surveillance and reconnaissance systems. The Navy’s development of DEWs like the LWSD, provide immediate warfighter benefits and provide the commander increased decision space and response options.

“The Solid State Laser Weapons System Demonstrator is a unique capability the Portland gets to test and operate for the Navy, while paving the way for future weapons systems, “ said Sanders. “With this new advanced capability, we are redefining war at sea for the Navy.”

Portland is the 11th San Antonio-class amphibious transport dock ship. While it is the third ship to bear the name ‘USS Portland,’ it is the first ship to be named solely after the largest city in Oregon.