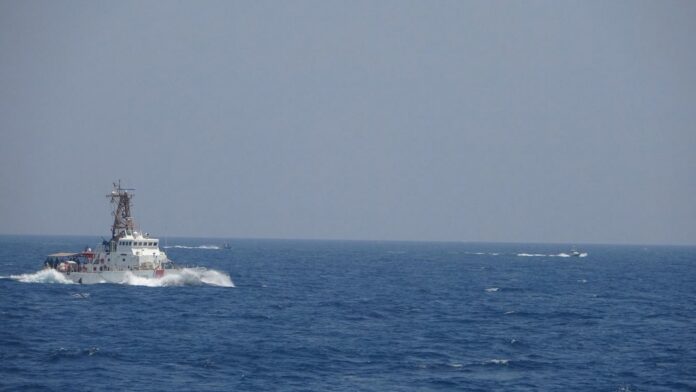 A U.S. Coast Guard cutter fired two rounds of warning shots at the Iranian Islamic Revolutionary Guard Corps Navy (IRGCN) fast in-shore attack crafts (FIAC) after what the Pentagon described as an “unsafe and unprofessional” encounter in the Strait of Hormuz.

The Iranian vessels left after 30 warning shots were fired, the Pentagon said. Pentagon spokesman John Kirby accused the Iranian boats of “acting very aggressively” near the US military vessels, which were escorting USS Georgia, a guided-missile submarine.

The following is the statement of the U.S. Sixth Fleet about the incident:

On May 10, 2021, Iranian Islamic Revolutionary Guard Corps Navy (IRGCN) fast in-shore attack craft (FIAC), a type of speedboat armed with machine guns, conducted unsafe and unprofessional maneuvers and failed to exercise due regard for the safety of U.S. forces as required under international law while operating in close proximity to U.S. naval vessels transiting the Strait of Hormuz.

Two of the 13 IRGCN vessels broke away from the larger group, transited to the opposite side of the U.S. formation and approached Maui and Squall from behind at a high rate of speed (in excess of 32 knots) with their weapons uncovered and manned.  The remaining 11 FIAC maintained position which places the formation of the U.S. ships in between the two IRGCN groups.

In order to de-escalate the situation and ensure the safety of all ships and personnel, U.S. crews issued multiple warning to both groups of IRCGN vessels.  Maui and Squalls’ warning to the group of two including repeated bridge-to-bridge verbal warnings, five acoustic device warnings, and five short blasts of the ship’s horn, the internationally recognized danger signal outlined in the International Regulations for Preventing Collisions at Sea (COLREGs).

After U.S. naval ships repeated verbal and acoustic warning, sounded five blasts of the ship’s horn, and fired warning shots, the two FIAC altered course and increased their distance from the U.S. forces.

During the interaction, the IRGCN vessels came within 150 yards of Maui at high speed, an unnecessarily close range that put the ships and their crews in immediate danger.

The U.S. crews operated with distinct professionalism and superior seamanship.

As professional mariners, we expect the IRGCN to operate with due regard for the safety of all vessels as required by international law.

Our Navy will continue to fly, sail and operate anywhere international law allows while promoting the rules-based international order throughout the region. In support of international norms, the U.S. is not an aggressor; our naval forces remain postured in a non-provocative manner that exemplifies professionalism, incentives adherence to international law and customs, and persuades others to emulate our actions. Our forces are trained, however, to conduct effective defensive measures when necessary.

Check out Naval Library App to find out the specifications of the Iran and US Naval Assets.