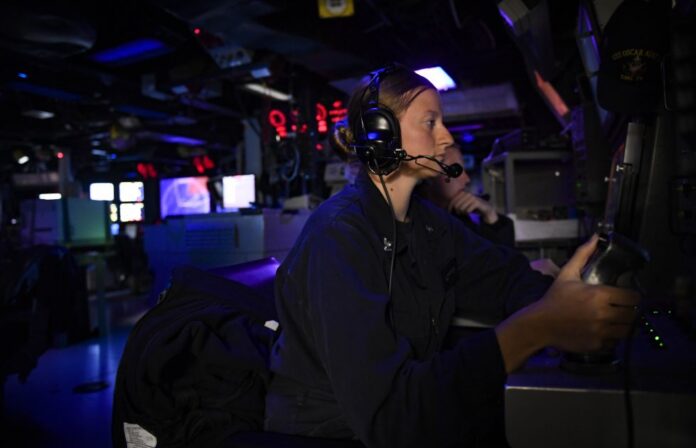 The U.S.Navy established new rest guidelines for surface ship crews and is exploring whether specially tinted eyewear can help sailors fall asleep faster during scheduled downtime, after a recent deep-dive into surface force readiness showed that crews were overworked and under-rested.
U.S.Navy leadership acknowledged over the summer that poorly rested crews on deployment saw degraded performance due to insufficient sleep. After the Comprehensive Review of Recent Surface Force Incidents also noted the link between work performance and sleep, the U.S.Navy has sought to take measures to help sailors get more and better rest.
One tactic is to address sailors’s ability to fall asleep after working shifts at computer screens or in artificial lighting. Blue light – what emanates from screens or artificial lighting – blocks the brain’s production of melatonin, the chemical created by the brain to help people fall asleep, according to Navy researchers.
Based on initial testing, Navy researchers think wearing specially tinted glasses for an hour or two before bedtime can make falling asleep easier.
Using currently available materials, the Naval Ophthalmic Support and Training Activity, based at Naval Weapons Station Yorktown, crafted a tint for safety lenses that blocks about 70 percent of blue light, according to a Military Health System news release.
Vice Adm. Tom Rowden, commander of Naval Surface Forces, released a statement explaining that the Comprehensive Fatigue and Endurance Management Policy fulfills one of the recommendations provided by the comprehensive review.
The guidance calls for sailors to get a minimum of seven hours of sleep in a 24-hour day – either seven uninterrupted hours, or five uninterrupted hours with a follow-on two-hour uninterrupted nap. Also, according to the guidance, a sailor’s workday should not exceed either 12 hours in a 24-hour period or eight hours of continuous work, except when required by operational tasks.