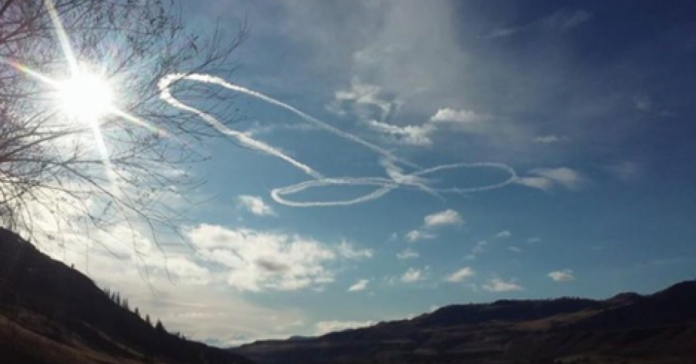 U.S.Navy officials were faced with an unusual controversy after residents of Okanogan County, Washington noticed a sky drawing many said looked like male genitalia on Thursday.
“US Navy air crew, flying an F/A-18 Growler (Electronic Attack Aircraft) assigned to Electronic Attack Squadron 130 based at Naval Air Station Whidbey Island, Wash., flew an air pattern over Okanogan County, Washington, on Thursday, November 16, that left a condensed air trail resembling an obscene image to observers on the ground,” Navy spokesperson Lt. Cmdr. Leslie Hubbell said.
Navy “Air Boss” Vice Adm. Mike Shoemaker issued a sharp rebuke of the crew’s actions and emphasized the service’s commitment to “foster an environment of dignity and respect.”
“Sophomoric and immature antics of a sexual nature have no place in Naval aviation today,” Shoemaker said in a written statement.
“This event clearly stands in stark contrast to the way our aviators and Sailors are performing with utmost professionalism, discipline and excellence from our carrier flight decks and expeditionary airfields around the world today,” he said.
Several individuals also took to social media to post photos of the phallic drawing.
“The Navy holds its aircrew to the highest standards and we find this absolutely unacceptable, of zero training value and we are holding the crew accountable,” a statement from the Navy air station said.
“The actions of this aircrew were wholly unacceptable and antithetical to Navy core values. We have grounded the aircrew and are conducting a thorough investigation – and we will hold those responsible accountable for their actions,” Hubbell added. “The Navy apologizes for this irresponsible and immature act.”