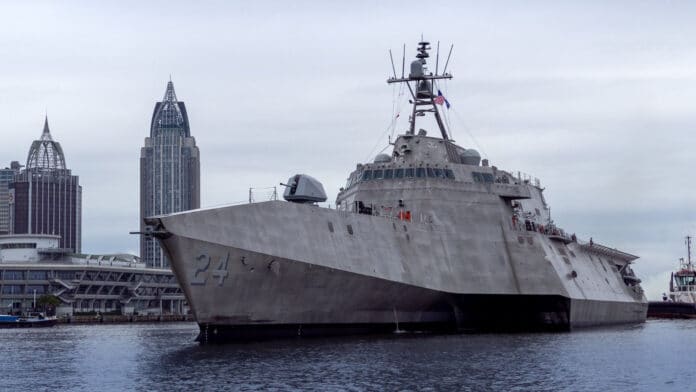 The U.S. Navy accepted delivery of the future USS Oakland (LCS 24) June 26 during a ceremony at Austal USA in Mobile, Alabama.

Oakland is the 22nd littoral combat ship (LCS) and the 12th of the Independence variant to join the fleet. Its delivery marks the official transfer of the ship from the shipbuilder to the Navy, bringing the service’s inventory up to 300. It is the final milestone prior to its scheduled commissioning in early 2021.

“This is a great day for the Navy and our country with the delivery of the future USS Oakland,” said LCS program manager Capt. Mike Taylor. “This ship will play an essential role in in carrying out our nation’s future maritime strategy.”

The future USS Oakland is the third U.S. Navy ship to honor the long history its namesake city has had with the Navy. The first Oakland was commissioned in 1918 and used to transport cargo. In 1943 the second USS Oakland was commissioned. Though in service for less than seven years, she was key to many anti-aircraft missions in the Western Pacific—Marshall Islands, Pagan Island, Guam, Iwo Jima, Rota, Peleliu and Okinawa. After the war, Oakland performed two duty patrols off the coast of China before her decommissioning in 1949.

The LCS is a fast, agile, mission-focused platform designed to operate in near-shore environments, while capable of open-ocean tasking and winning against 21st-century coastal threats such as submarines, mines, and swarming small craft. The LCS is capable of supporting forward presence, maritime security, sea control and deterrence.

Check out Naval Library to find out specifications of Independence Class LCS.