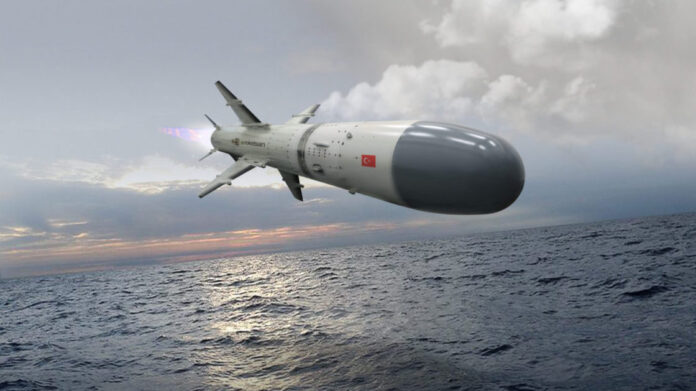 At the press conference where information was given about the final tests of the ATMACA anti-ship missile, President Demir outlined that ATMACA is far better than its competitors and counterparts. Stating that efforts are being made to end the external dependence in the engine, Demir said, “Next year we will see that domestic cruise missile engines are used on the systems.”

“One of the final tests of ATMACA was completed successfully. This was the penultimate test of ATMACA. One more test left. But it means we have come to the end. We expect the company to start mass production activities on the one hand.” Mr.Demir said.

“The maturation of a product does not take place in 2-3 tests. Among the systems developed today, we have systems where nearly 50 tests are performed until the maturity stage. I this respect, announcing the test of a product could be understood as it’s ready by the public. The product qualification process must be completed so that the user can use it without any doubt. In addition to ATMACA, work is also being carried out on ground-to-ground cruise missiles and air-to-ground cruise missiles derived from it.” he added.

In his speech at the meeting, Roketsan General Manager Murat Ikinci emphasized the importance of GPS-free flight, especially in the last test.

“This test was actually a scenario that included testing ATMACA under the most difficult conditions. It is a profile that is used clearly with its own inertial navigation unit, which is GPS-independent, calculating the target very seriously. This was an indication that the efficiency of ATMACA was measured clearly in environments where electronic warfare is very intense. In cases where there is any external intervention or jamming, ATMACA prepares for the most challenging scenarios in this way.” Mr.Ikinci commented.

Warhead was not used in ATMACA in this test-fire. After being tested with the warhead in the final test, ATMACA will be ready for mass production.