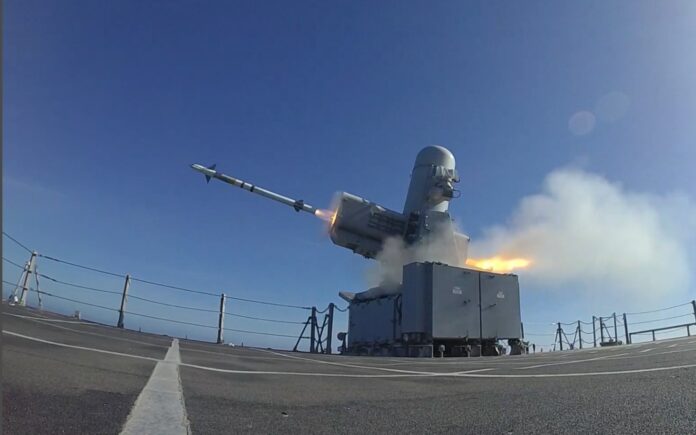 Warships and their watch teams conduct live-fire exercises, like the SeaRAM launch, in preparation for contributing to the high-end fight and maintaining warfighting readiness within the surface fleet.

“I am incredibly proud of the Charleston Gold crew and the efforts that have led to this successful SeaRAM launch,” said Cmdr. Joseph Burgon, commanding officer of Charleston’s Gold Crew. “Warfare Tactics Instructor (WTI) involvement, tactical planning, and support from Mine Division TWELVE were key to today’s successful live-fire exercise.”

“SMWDC is out here because our mission is to increase the lethality and tactical proficiency of the Surface Force across all domains,” said Lt. Cmdr. Timothy Boston, an integrated air and missile defense (IAMD) WTI. “The results from firing exercises like this one are used to test and validate tactics, assess system performance and identify future training requirements – all geared to increase the lethality of the Surface Force.”

As part of planning and preparations for live-fire events, well-established safety precautions are implemented to ensure designated live-fire ranges are cleared as well as sending out local notices to mariners, and the ship’s crew making bridge-to-bridge calls prior to, during, and following the exercise.

LCS is a highly maneuverable, lethal, and adaptable ship designed to support focused mine countermeasures, anti-submarine, and surface warfare missions. The Independence-variant LCS integrates new technology and capability to affordably support current and future missions, from deep water to the littorals.

Headquartered in San Diego, SMWDC has four Divisions in California and Virginia focused on IAMD, amphibious warfare, anti-submarine warfare/surface warfare, and mine warfare.

Why U.S. Navy choose SeaRAM for the latest warships:

SeaRAM is an extremely accurate weapon. Other missiles like ESSM are more maneuverable. However, accuracy is about more than missile agility. RAM utilizes a tri-mode seeker, mixing two different sensors. It has its own IR seeker and RF (radio frequency) seeker/link. The SeaRAM incorporates mount sensors that update the missile constantly with both a very high-resolution radar and its IR and Optical aid of the Block IB.

RAM is extremely effective against stealthy non-emitting anti-ship missiles due to the performance of its IR seeker. If the incoming missile is emitting active radar that the vast majority do, RAM will use its IR seeker and its RF seeker to home on the missile both visually and by emissions. Conversely, the RAM can accurately guide the incoming missile with just its RF seeker in an active jamming environment. The SeaRAM and its launcher sensors make these advantages two-fold.

RAM’s latest version, the Block II incorporates a new rocket motor, with a more powerful/longer thrust and a 4-axis actuator. It’s a steerable bullet with thrust vectoring. Block II is infinitely more maneuverable than the original Block 0 and Block I missile, which had the propulsion section of the AIM-9 Sidewinder. The 4-axis actuator allows for pinpoint and lightning-fast adjustments. Block II’s have a very high percentage of ‘skin on skin’ intercepts against even supersonic foes. Block II has an unrivaled record in testing on subsonic and supersonic targets.

Check out Naval Library App to find out the specifications of the RAM Missile.