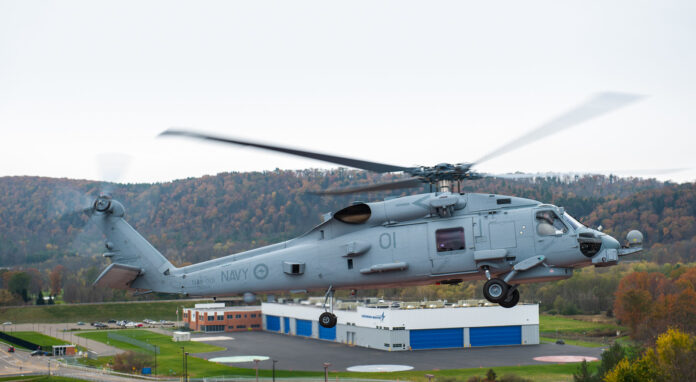 Three aircrews to the MH-60R helicopter has been safely rescued after ditching their helicopter.

The aircraft, which was embarked aboard the Hobart class destroyer, HMAS Brisbane, was conducting a routine flight as part of a regional presence deployment with the ANZAC class frigate HMAS Warramunga, when the crew “conducted an emergency landing in the water” in the Philippine Sea during on Wednesday night (Oct 13/14).

The crew was recovered 20 minutes after the accident by the boats from HMAS Brisbane. The aircrew has experienced minor injuries during the accident. The ships are looking for debris, but the helicopter is most certainly a total loss. Both ships continue to search the area for any debris, which will aid in determining the cause of the incident.

Australia has grounded its fleet of MH-60R Seahawks after the incident.

Commander of the Australian Fleet, Rear Adm. Mark Hammond, commended the crews of both ships involved for their quick response to the emergency.

“The successful rescue is credit to the devotion to duty and skill of the officers and sailors of HMAS Brisbane,” Hammond said in a statement. “Their immediate actions ensured the survival of the aircrew, validating the significant training undertaken in the event an emergency of this nature occurs. With the aircrew safe, investigating the circumstances that led to the helicopter ditching is the priority at the moment. As a precaution, we have temporarily paused flying operations of the MH-60R Seahawk fleet.”

Australia operates a fleet of 24 Sikorsky MH-60R Seahawks, primarily as a sub-hunter and anti-surface ship aircraft. On Oct. 8, the U.S. State Department approved the sale to Australia of another 12 helicopters for $985 million.

Check out Naval Library App to find out more about the specifications of the MH-60R Seahawk helicopters.