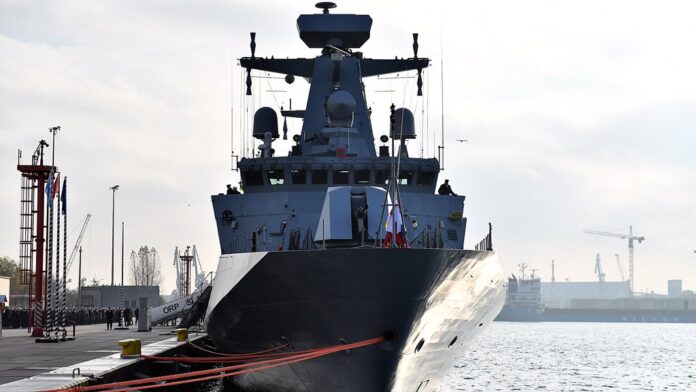 “We witnessed a historic moment. It is important for the Navy to develop ” said the head of the Ministry of National Defense Mariusz Błaszczak in the port of Gdynia.

Slazak was initially expected to be the first ship of a new class of Gawron-class corvettes. Despite the vessel’s hull being launched in 2009, the entire project was cancelled in 2012. The government subsequently made the decision to convert the corvette into an offshore patrol vessel.

Originally Ślązak was designed to be a multi-mission corvette with anti-aircraft and ASW assets, as well as anti-ship missiles, integrated onboard. The keel for that vessel was laid back in 2001. Back then no decision was made with regards to missile systems and combat system. With the project being financially understated since the very beginning, this has been the cause of prolonged build. Numerous technical issues were troubling the builders during the process. Financing was also being limited, despite the fact that it has been insufficient since the very beginning of the process.

The converted vessel was to be delivered to the navy by November 2016. After that deadline was not met, Polish media reports indicated July 2018 as the new delivery date. Long story ended at 28th November and the ship is delivered to Polish Navy.

To realize its vision the Polish Navy turned to Thales for a robust patrol capability. They had already collaborated on Poland’s Orkan class fast attack craft, bringing Thales’s breadth of systems know-how, and long experience in equipping leading navies, to the Polish fleet. Among the carefully scrutinised competitors for this project, the navy considered that Thales’s approach of combining technical excellence with a long-term commitment to its customers was the right fit to its values of technical rigour and deep understanding of its systems.

Building on an already successful partnership, the navy selected Thales to supply and integrate the entire mission suite for ORP Ślązak. The scope of the work was considerable, with Thales’s Tacticos Combat Management System (CMS)—with its open architecture and latest-sensor design—central to successfully integrating a range of leading-edge equipment on board. Thales’s Sting-EO Mk2 Fire control Radar, MIRADOR electro-optical system for observation and target tracking, LINK 11/16 tactical data link system, Automatic Identification System (AIS), and CCTV, are also integrated into the vessel.

ORP Ślązak was delivered to Polish Navy placed in Thales as its main systems partner borne out in successful and highly satisfactory acceptance tests. The ship’s commissioning represents another milestone in Poland’s enhancement of its maritime capability, and in Thales’s developing role in helping deliver this.

Polish Navy’s partnership with Thales seems to continue, with an upgrade of the Orkan class ships currently under exploration.