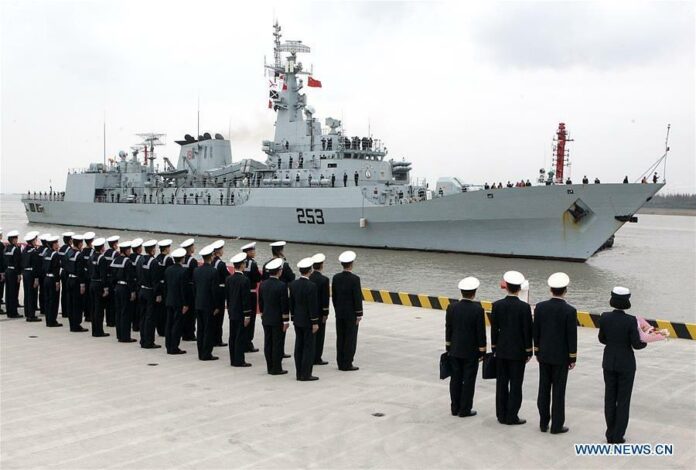 Pakistani naval ship SAIF arrived at Wusong Naval Port  on Thursday (Nov 30) on a goodwill visit and to participate in a joint naval exercise to further boost defence cooperation with their Chinese counterpart.
The naval ship was welcomed by Pakistan’s Consul General in Shanghai, Naeem Khan, Senior Captain Wei Xiaodong of People’s Liberation Army (PLA) and officials of the government of Shanghai municipality.
On its arrival, a band of PLA Navy played welcoming tunes.
PNS SAIF, which is part of 18th Destroyer Squadron of Pakistan Navy, is commandeered by Captain Shahzad Iqbal.
Speaking on the occasion, Captain Iqbal highlighted the significance of the visit and brotherly relations between Pakistan and China. “We traveled more than 9,000 Nautical Miles from Pakistan to Shanghai.
This distance will reduce manifold on completion of the China-Pakistan Economic Corridor (CPEC),” he added.
Captain Iqbal informed that PNS SAIF was built in 2010 in Shanghai and this was its first visit to Shanghai.
He shared that the ship would participate in a bilateral naval exercise which he hoped would be advanced and meaningful.
This would be the 5th Joint Naval Exercise in the series.
Pakistan Navy and PLA Navy have longstanding relations.
On its journey to Shanghai from Pakistan, PNS SAIF docked in Colombo, Sri Lanka and Pattaya, Thailand.
After Shanghai, it plans to visit ports in the Philippines and Malaysia.
The PNS SAIF, a sword class F22 P frigates of Chinese origin, is equipped with state of the art weapons, sensors and machinery, making it capable of undertaking a variety of maritime operations.