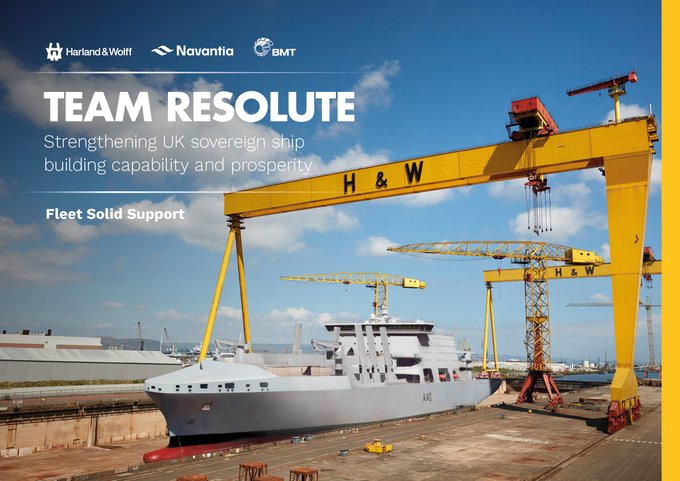 Northern Irish shipbuilder Harland & Wolff has joined forces with Spanish shipyard Navantia, to form “Team Resolute”, a UK shipbuilding collaboration which will bid for a range of contracts, including the UK Ministry of Defence Fleet Solid Support Programme (‘FSS’). As part of this, Harland and Wolff has signed an exclusive Teaming Agreement with Navantia, with BMT participating as an exclusive subcontractor in the FSS Programme.

In a press release Team Resolute wrote: “Team Resolute combines 159 years of shipbuilding experience at one of the UK’s biggest shipyards, including the two largest dry docks in Europe, with unrivalled auxiliary design experience from UK designer BMT and a world-leading auxiliary shipbuilding track record from Navantia.”

The teaming agreement follows a Memorandum of Understanding (MoU) signed by InfraStrata and Navantia last year that raised hopes the Fleet Solid Support Ship contract would be awarded to a UK contractor. The MoU laid the groundwork for further discussion on sharing work on the programme should it be awarded to Navantia.

The partnership described its offer to build the Fleet Solid Support Ships as ‘low risk and value for money UK solution’ based on the companies’ experience in building similar support vessels for foreign navies.

If successful in its bid, the FSS ships would be designed by BMT and assembled at Harland and Wolff’s Belfast shipyard incorporating ‘wider UK fabrication, materials and equipment.’

Under the deal, Navantia would also supply ‘digital shipyard knowledge’ to Harland and Wolff, which the partnership says could improve efficiency by up to 20%. The technology would be used for the FSS programme and other UK naval modernisation efforts that Team Resolute hopes to secure.

Team Resolute has also identified future naval, commercial and offshore renewable contracts. Navantia delivers a wide range of naval and support ships to governments around the world. Team Resolute is already exploring future commercial opportunities together, and there is a real opportunity for UK suppliers to secure future work on other Navantia and Harland & Wolff programmes.