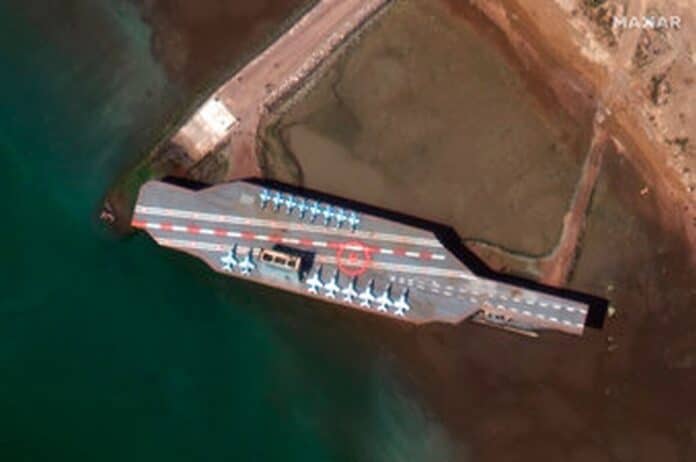 Iran commenced the annual “Great Prophet 14” naval exercises on 27th July, an exercise designed to demonstrate Iranian air and naval power to the rest of the world. The exercise, held by the regime’s Revolutionary Guard Corps (IRGC) paramilitary force in the Strait of Hormuz, is meant to demonstrate Iran’s asymmetric military capabilities, including diving commandos, raiders, and helicopter-mounted anti-ship missiles.

The exercise featured a helicopter launching an anti-ship missile at a scale copy of the aircraft carrier USS Nimitz, which was transferred to the Strait of Hormuz, amid rising tensions between Iran and the United States. The copy is actually a barge made up to look like an American nuclear-powered aircraft carrier, complete with fake aircraft.

An image from Maxar Technologies taken on 26th July shows an Iranian vessel heading towards the fake aircraft carrier, sending waves after a tugboat pulled it into the strait of the Iranian port city of Bandar Abbas.

The barge was attacked in 2015’s “Great Prophet 9” but was recently repaired. Commercial satellites spotted the “carrier” being towed by tug boats into the strait a day before the exercise, hinting at the attack to come.

State television footage also showed a variety of missiles being fired from fast boats, trucks, mobile launchers and a helicopter, some targeting the fake carrier. A commander said the Guard, a force answerable only to Khamenei, planned to fire “long-range ballistic missiles” as well during the drill that continued Wednesday.