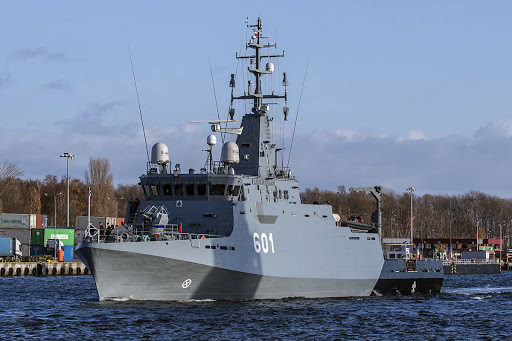 The two equipped vessels, ORP Albatros and ORP Mewa were built by PGZ Stocznia Wojenna Shipyard in Gdynia, Poland. Installed in conjunction with an OSI Maritime Systems integrated navigation bridge system, the radar will be tasked with navigation and surface surveillance functionality, providing the Polish Navy with solid-state radar sensors to ensure the safety of navigation whilst providing advanced small target search capability. This capability contributes to the shipping safety of navigation and enhances the performance in the operational tasks.

Adrian Pilbeam, Head of Sales Maritime Surveillance commented: “HENSOLDT UK are pleased to supply the Polish Navy with their first SharpEye radars to assist in the demanding operational tasks of a minehunter. This further extends a longstanding relationship for the supply of radar sensors to OSI Maritime Systems for integration into their bridge systems.”

Kelvin Hughes Mk11 SharpEye is a pulse-Doppler radar for navigation and situational awareness. The ability to see smaller targets in clutter and at greater ranges increases the warship’s capability.

SharpEye is defining new standards in surveillance missions at sea, onshore and on land with transmit powers of up to 300W. It is used by navies, vessel traffic services, border agencies, coastal surveillance, other security agencies and critical infrastructure operators.

The radar I-band (X-band) and E/F-band (S-band) technology is a fully coherent radar providing situational awareness in all weather conditions and in high sea states.

Mk11 Sharp Eye I-band (X-band) transmitters are the first in their class to employ GaN (Gallium Nitride) power transistor technology. The significant performance benefits of GaN transistors have been harnessed by SharpEye to directly improve the performance of the radar.

Sharp Eye technology uses the Doppler effect to determine target radial velocities. This is achieved by processing received echoes into velocity bands, enabling the separation of genuine targets from clutter. Extracting the relative motion of targets by measuring the phase of the received echo relative to the phase of the transmission enables the radial velocity to be determined.