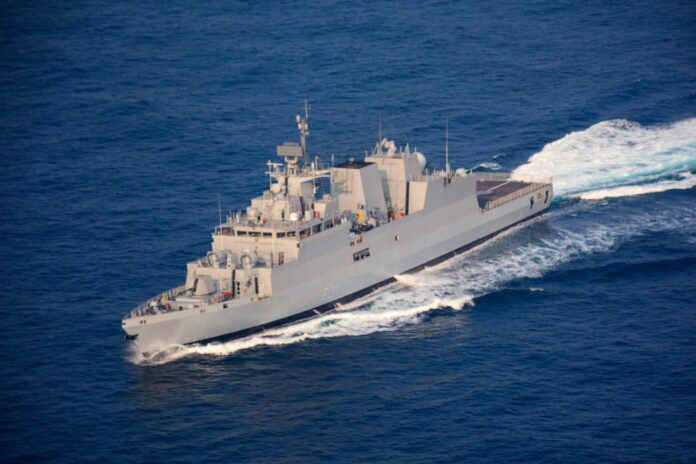 The warship is the 104th warship built and delivered by the GRSE and is the last in the series of Anti-Submarine Warfare Corvettes (ASWC).

The first three in the series, INS Kamorta, INS Kadmatt and INS Kiltan were delivered earlier as part of “Project 28”. These ships strengthens the Indian Defence System and is the shining Armor in the “Make in India” programme.

With 90 percent indigenous content, the P-28 class ships are equipped to fight in nuclear, biological and chemical warfare conditions and featured the integration of a host of weapons and sensors.

These ASW corvettes have catapulted the Indian Navy into the elite club of countries that have built stealth ships, a GRSE official said, adding that the stealth features make the ships almost invisible to the enemy, both above and below the sea surface.

The corvettes, designed as an extremely versatile ASW platform capable of neutralising enemy submarines with indigenous weapons like torpedoes and rocket launchers, are equally effective in the littorals and deep oceans, the official said.

Capable of attaining a maximum speed of 25 knots, the ship has a length of 109 metres and width of 12.8 metres, he said, adding that it has an endurance of over 3400 nautical miles (NM) at 18-knot speed, and can accommodate 17 officers and 106 sailors.

Kavaratti is to be armed with a range of indigenously developed cutting-edge weapons and sensors, including “76.2 mm medium-range gun, RBU-6000 torpedo tube launchers, BARAK Surface-to-Air missile  and AK-630M close-in weapon system”. The ship will also contain an integrated communication system and an electronic warfare system.