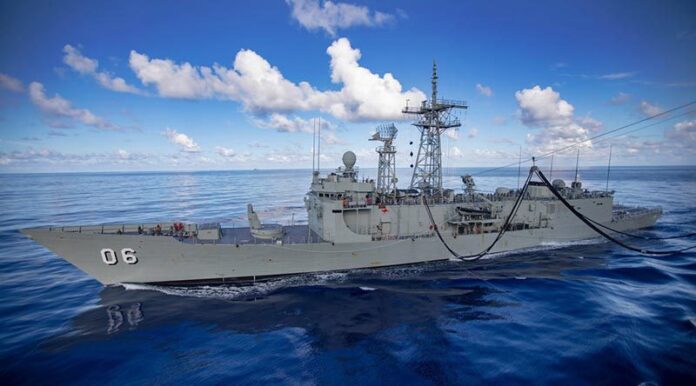 According to Australian Media, high-ranking officers from the Greek Navy were hosted on-board HMAS Newcastle as it was docked in Singapore during Exercise Indo-Pacific Endeavour in May. Sources in Greece have indicated the officers were ‘not satisfied’ with the condition of the ship and have concerns about the availability of spare parts, although ADM was unable to confirm this with Defence.

When asked about the purpose of the Greek visit on-board HMAS Newcastle, a Defence spokesperson gave the following answer: “HMAS Newcastle hosted numerous international guests, including representatives from the Greek Government, in Singapore as part of the very successful Indo-Pacific Endeavour 19 program.”

Two months later, the Australian Embassy in Greece requested a meeting with the head of the Greek Agency for Military Procurements, Vice Admiral Kyriakou Kyriakidis. According to a Greek government press release, the conversation covered “issues of mutual interest in the field of defence equipment and cooperation in the defence industry.” Greek sources indicate Australia requested the meeting to put forward a new offer on the Adelaide class frigates, although ADM has again been unable to confirm this with Defence.

“Defence is unable to comment as all engagements with foreign governments on the transfer of ADF assets are treated as commercial-in-confidence,” a spokesperson said.

Although it is unclear whether “the transfer of ADF assets” refers to the Adelaide class, it seems unlikely that RAN would host Greek officials on the ship they have previously expressed interest in buying, and then request a meeting with the Greek chief of military procurements, if not to either develop or put forward a new offer on the FFGs.

ADM understands that Greece’s previous interest in the Adelaide class waned because Defence was unwilling to include SM-2 Block IIIA air defence missiles and surface-to-air Evolved Sea Sparrow Missiles (ESSMs) with the warships. It is unclear whether these missiles have now been offered to Greece under a possible new deal, which would need US end-to-end user certificates given FMS/ITARs issues.

US approval, however, may not be hard for Greece to gain. The Hellenic Navy has also entertained a frigate offer from Lockheed Martin, which could involve a local build: Greek/American company ONEX has moved to buy Greece’s Syros shipyard (the country’s third-largest) with the blessing of the American ambassador, who commented that Greece is ‘back and open for business’. The ambassador has also spoken of American interest in the port of Alexandroupolis, which hosts elements of the US Army’s 10th Combat Air Brigade.

Greek sources believe that the US sees RAN’s Adelaide class frigates as an interim capability for Greece, able to fill acute operational requirements whilst American-designed ships (possibly an LCS variant) are built locally.

In short, the Australia is quietly negotiating with Greece over a sale of the FFGs and possibly associated weapons systems as US industry positions for a longer-term Greek frigate program with the blessing of the White House.

On the other hand, Greece is up to procure Belharra Class Frigates and/or Gowind Class Corvettes made by French Shipbuilder Naval Group and still keeps negotiating about the procurement project. We know Greece have financial limitaitons and government is not planning to spend a big fund for this purchase. However situation at Eastern Mediterranean forces government to keep strong fleet, and they urgently need to acquire frigates in place of old Kortanears. We wonder if this Adelaide issue is a substition of Belharra project or they are planning to get both of them. We will see.