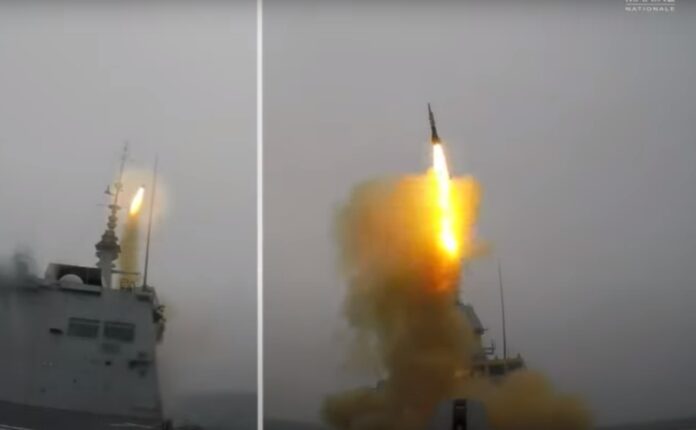 This successful firing conducted against an aerial target. The missile successfully hit its target, which was an aerial drone, representing an incoming missile. “DGA Essais de missiles” secured the firing area and provided the target drone.

“DGA Essais de missiles” is a launch site for the test of military rockets and for launching sounding rockets in France. It is the only European center capable of performing long-range missile flight tests.

Normandie was developed as part of a joint Italian-French program known as FREMM, which was implemented to develop a new class of frigates for use by various European navies. Constructed from 2014. On 1 February 2018, the frigate Normandie was launched. Originally, the name of Normandie was to be worn by the frigate launched in 2012, but it was sold to the Egyptian Navy in 2015 and renamed Tahya Misr.

Armed with a partial crew of 75 sailors, the ship carried out its first sea trials in March 2019 under the responsibility of the Directorate-General for Armament. Unlike previous ASW variants of the FREMM class, Normandie and its sister ship Bretagne are fitted with SYLVER A50 launch cells (instead of SYLVER A43) able to accommodate larger Aster 30 surface-to-air missiles. This provides both ships with a potentially enhanced area air defense capability

Check out the Naval Library App to find out the specifications of Aquitaine (FREMM) class Frigates. Naval Library is both available on Google Play and App Store.