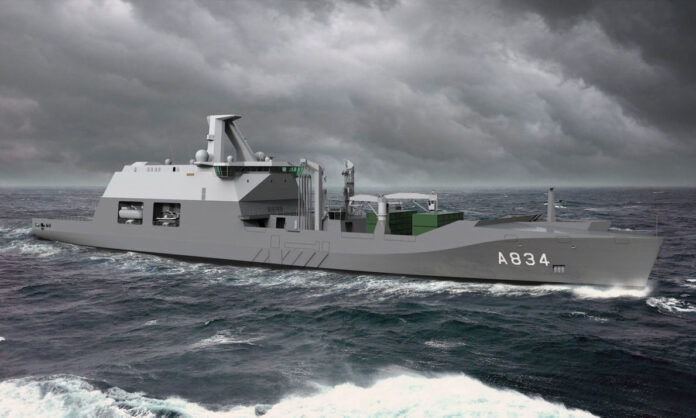 This marks an important milestone in this project, the first tangible part of the construction.

The steel cutting was supposed to take place in February next year. DSNS has brought the date forward in order to safeguard the project’s progress during the continuing coronavirus pandemic and to effectively manage the enhanced security rules that alter the way of working for the shipyard.

With construction of the CSS, the maritime supply capacity of the RNLN will be restored. The vessel will operate alongside the Joint Support Ship (JSS) HNLMS Karel Doorman and is based on the same design. The vessel can operate worldwide and under high threat, protected by frigates. Additionally, she can be used in the fight against drug trafficking, controlling refugee flows and providing emergency aid.

Engineering of the vessel is taking place mostly in the Netherlands and the project will provide work for over 100, mainly Dutch, companies. To date, 47 contracts have been signed for the CSS, out of which 34 with Dutch maritime suppliers.

The next milestone will be in May next year, when the keel-laying ceremony will take place.