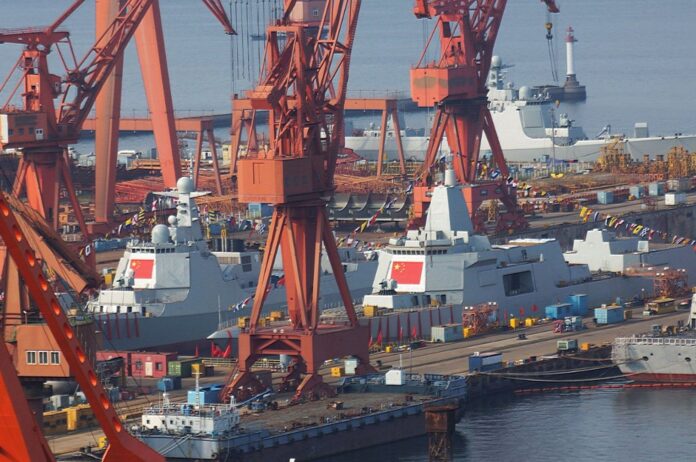 The new warships are touted to be on par with world’s top destroyers including America’s Arleigh Burke-class and Zumwalt-class, Chinese media reported.

The Chinese People’s Liberation Army Navy (PLAN) plans to have a fleet of 8 Type 055 destroyers, its most powerful naval vessel till date. Displacing more than 10,000 tons, the Type 055 is a 180-meter-long, 20-meter-wide guided missile destroyer with 112 vertical launch missile cells capable of launching missiles such as surface-to-air, anti-ship, land-attack and anti-submarine missiles, according to media reports. There are plans of the destroyer being deployed for anti-ballistic missile operations.

The Type 052D destroyer is a larger variant of the Type 052C; the Type 052D uses a canister-type, instead of revolver-type, vertical launching system (VLS) and has flat-panelled active electronically scanned array (AESA) radar.[8] The new VLS is not limited to surface-to-air missiles, making the Type 052D China’s first dedicated multi-role destroyer.

The Type 052D is also equipped with both variable depth (VDS) and linear towed array sonar. The VDS is deployed through a hinged opening in the transom by a hydraulic lifting mechanism. The VDS body is a streamlined fairing fitted with Y-shaped hydrodynamic vanes for towing stability.

The Type 52D is the first Chinese surface combatant to use canister-based universal VLS, as opposed to the concentric type VLS carried aboard earlier vessels. 64 cells are carried; 32 forward and 32 aft. The VLS is reportedly an implementation of the GJB 5860-2006 standard. The VLS may fire the extended-range variant of the HHQ-9 surface-to-air missile, YJ-18 anti-ship cruise missiles, and CY-5 anti-submarine missiles.

Early units were completed with 7-barrelled Type 730 close-in weapon system (CIWS). This was replaced in later units by the larger 11-barrelled Type 1130 CIWS.

The Type 055 destroyer is a class of stealth guided missile destroyers being constructed for the Chinese People’s Liberation Army Navy Surface Force. It is a multi-mission design; the combination of sensors and weapons suggests a main role of area air defence, with anti-submarine warfare capabilities surpassing previous Chinese surface combatants.

The Type 055 is expected to undertake expeditionary missions and form the primary escort for Chinese aircraft carriers.

The Type 055 adopts a conventional flared hull with distinctive stealthy features including an enclosed bulbous bow that hides mooring points, anchor chains and other equipment. The bow and main deckhouse are configured similarly to previous Type 052C/D destroyers.