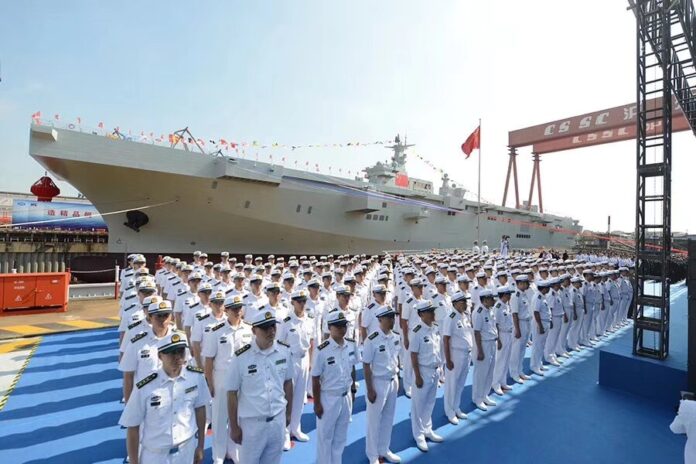 China’s first amphibious assault ship was launched in Shanghai on Wednesday (Sep 25), coming closer to the completion of its construction project.

The People’s Liberation Army Navy said in a statement that after a brief ceremony starting at 9:20 am, waters began to be pumped into a dry dock in which the ship’s hull was built.

Participants at the ceremony – officials from the central and Shanghai governments, officers from the Central Military Commission’s Equipment Development Department and the PLA Navy, executives of the State-owned conglomerate China State Shipbuilding Corp as well as the vessel’s designers and construction workers – applauded as they watched the launch process, the statement said, without providing more details about the event.

In shipbuilding terminology, launch refers to the process during which a nearly-finished ship is moved into water. It is one of the most important stages in a ship’s construction because once a ship is launched, it means that its major structures have been readied and major work of the entire construction project has been done.

The ship was built by Hudong-Zhonghua Shipbuilding, a major shipbuilder under China State Shipbuilding Corp., According to the Chinese Navy, the new ship, whose name remains unknown as the Chinese military usually makes public a warship’s name at its commissioning ceremony, was domestically developed and constructed. It will have a strong capability to carry out amphibious combat and other tasks.

The Navy added that in the next phase, engineers will start outfitting and fine-tuning the vessel’s equipment and then conduct mooring tests and sea trials.