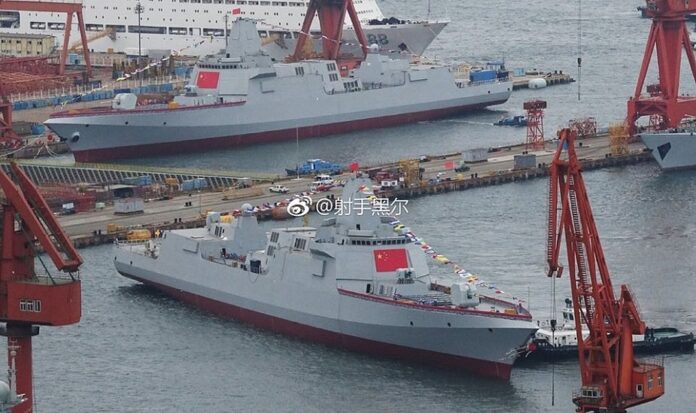 Type 055 likely to be armed with experimental electromagnetic railgun
Two of China’s newest-generation guided missile destroyers – Type 055 – have been launched in Dalian, a coastal city of Northeast China’s Liaoning Province, on July 3 , marking China’s fourth such launch of Type 055 destroyers.
Type 055 is China’s first home-grown 10,000-ton class missile destroyer, and the first and second ships of this type were launched by the Shanghai Jiangnan Shipyard Group in June 2017 and April 2018. “Launching four 10,000-ton class missile destroyers in about one year shows China’s remarkable shipbuilding capability, and compared to other major naval powers, including the U.S., China’s speed is the fastest,” said Wang Yunfei, a military expert and a retired officer of the Chinese navy.
Type 055 has multiple roles to play in the future of the PLA Navy, including aircraft carrier escort, theater missile defense and sea-to-ground attack, Wang noted.  Military experts believe that the first Type 055 will be formally delivered to the PLA Navy by the end of 2018.
The two ships launched on July 3, might finish sea trials and be delivered to the PLA Navy by October next year, Song Zhongping, a military expert and TV commentator, told the Global Times on Tuesday.
Type 055 will also likely be armed with an electromagnetic railgun, Song said. “The Type 055 is the best fit for China’s future electromagnetic gun, for the all-electric warship could meet the weapon’s huge power supply demand.”