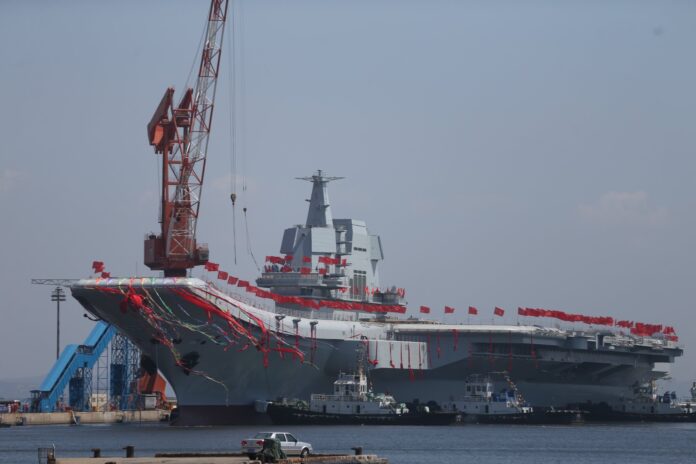 The commissioning ceremony fot the country’s first domestically built aircraft carrier, was presided by Chinese President Xi Jinping. The ceremony was also attended by officials from the Southern Theatre Command that oversees the strategically sensitive South China Sea.
Around 5,000 people attended the ceremony, singing the national anthem as the national flag was raised

The commissioning of the warship, named the Shandong, puts China in a small club of nations with multiple aircraft carriers, and the country is reportedly building a third.

Shandong is fitted with a ski-jump assisted Short Take-Off But Arrested Recovery (STOBAR) launch system, also installed aboard the Liaoning. She will be able to carry up to 24 Shenyang J-15 fighter jets, a variant of the Russian Sukhoi Su-33, as well as around ten helicopters including Changhe Z-18, Ka-31, or Harbin Z-9.

Construction of China’s first domestically built aircraft carrier the Shandong, began in November 2013. It was launched in April 2017 at the Dalian Shipyard, Northeast China’s Liaoning Province.

China also reportedly began construction of a third aircraft carrier, designated Type 002, at a Shanghai shipyard. This carrier will be equipped with a conventionally-powered catapult assisted take-off but arrested recovery (CATOBAR) aircraft launch system similar to the one used on U.S. Navy supercarriers. This system will enable the carrier to launch heavier jets such as Airborne Early Warning aircraft and also let the fighters takeoff with full payload of weapons and fuel.

It was announced earlier that the PLA Navy is also moving ahead with plans to build a fourth aircraft carrier. According to the reports, the construction of the aircraft carrier, which will be the most advanced carrier of the Navy, could start as early as 2021. The fourth vessel is also reportedly a Type 002 class aircraft carrier.