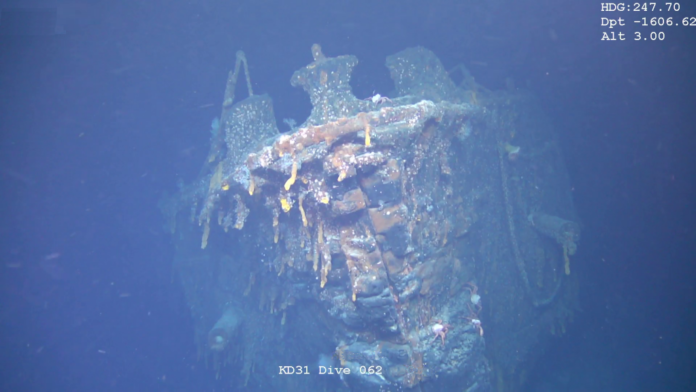 We have been witnessing succesful researches of wreckages of the ships sank during battles at previous century. These are very precious efforts because those wreckages help us to discover historical details. Last week researchers shared new photos and videos of a sunken warship off coast of the Falkland Islands, which could be considered as the latest link of the chain of researches.

The wreck of SMS Scharnhorst, a sunken armored battlecruiser of the German Navy, has been located off the Falkland Islands, the Falklands Maritime Heritage Trust said.

The wreck, lying some 1,600 metres (5,280ft) down, was discovered by marine archaeologist Mensun Bound, the first success in a search by the Falklands Maritime Heritage Trust to locate the warship.

It set out to locate all four German ships – heavy cruisers Scharnhorst and Gneisenau, plus light cruisers Nürnberg and Leipzig – initially to mark the centenary of the sinkings in 2014; the battle is a seminal moment in Falklands history, second only to the 1982 conflict, with December 8 commemorated each year as ‘Battle Day’.

The search five years ago drew a blank, but just three days into a renewed attempt in 2019, four deep-sea robot submarines and high-tech side-scan sonar on their mother ship, the search vessel Seabed Constructor, located the Scharnhorst as an area of seabed the size of Somerset was methodically scoured.

“The moment of discovery was extraordinary,” said Mr Bound. “We are often chasing shadows on the seabed, but when the Scharnhorst first appeared in the data flow, there was no doubt that this was one of the German fleet. You could even see the impact crater. We sent down a remotely-operated vehicle to explore and almost straight away we were into a debris field that said ‘battle’. Suddenly she just came out of the gloom with great guns poking in every direction.”

The Battle of the Falkland Islands followed the Battle of Coronel, fought off the coast of Chile in November 1914, where Graf von Spee’s fleet overpowered the Royal Navy and in which 1,600 British sailors perished. A month later a British squadron under the command of Vice-Admiral Doveton Sturdee defeated Graf von Spee’s squadron, comprising the Scharnhorst, Gneisenau, Nürnberg and Leipzig. The action was particularly important because as a consequence of the battle, the German East Asia Squadron, Germany’s only permanent overseas naval formation, effectively ceased to exist, bringing an end to commerce raiding by German warships.

The Scharnhorst, built in Hamburg in 1905, was the first to be sunk, having sustained substantial damage inflicted by HMS Invincible and HMS Inflexible. Tragically, 2,200 German sailors died, including Graf von Spee himself and his two sons – Heinrich aboard the Gneisenau, and Otto aboard the Nürnberg.

“It is less than a month since Remembrance Day, when we commemorated the millions who died in the First World War and subsequent conflicts. One episode in that conflict was the Battle of the Falklands in 1914,” Donald Lamont, Chairman of The Falklands Maritime Heritage Trust, noted.

The search we organised had as its aim the locating of all ships of the German squadron, so that we may learn more about the Battle and commemorate all who perished in it. The site of the wrecks can now be protected,” Lamont added.

The Falkland Maritime Heritage Trust is now seeking to have the site formerly protected in law. The wreck was not touched or in any way disturbed during the operation.