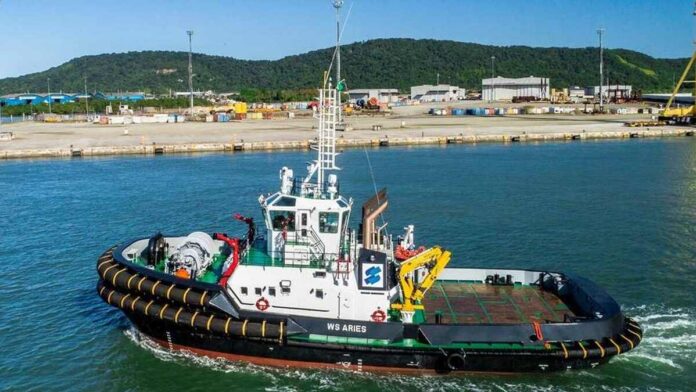 Eyes of the navy enthusiasts mostly on combatant and powerful ships, like aircraft carriers, submarines, destroyers and etc. But as all we know logistic is an indispensible part of the scene. There are unseen heroes, which we don’t give enough attention, but without them combatants cannot achieve missions easily. Tugs are one of them. They take over important roles, especially at emergencies. We want to direct your attention to a new powerful tug, Aries.

The group Wilson Sons launches, another tug of the escort tug class, WS Aries. It has 90 tons of static pull (bollard pull) and has an automatic winch system. The tug is 32 meters long by 12 meters and will operate in Açu Port (RJ). The vessel, built at the group’s shipyard in Guarujá (SP), has a Damen Shipyards project. The WS Aries is the last vessel in a series that already has the WS Titan, WS Procyon and WS Sirius escort tugs in operation.

The WS Aries has a Fire Fighting 1 (FiFi1) certified fire fighting system, which enables the tug to perform salvage operations. The vessel is allowed to sail more than 100 nautical miles from the coast. The render recovery winch allows automatic control of maximum towing rope tension. “With more technologies available and power, the number of options to assist with decision making during operations is increased, making them safer,” said Wilson Sons Estaleiros CEO Adalberto Souza.

In addition to the WS Aries and WS Sirius, Wilson Sons has two other escort tugs in its fleet, the WS Titan and WS Procyon. “They are tugs equipped and certified to accompany ships as boy scouts, which makes maneuvering more agile without giving up security throughout the operation,” explained Wilson Sons Tugs Operations Director Marcio Castro.