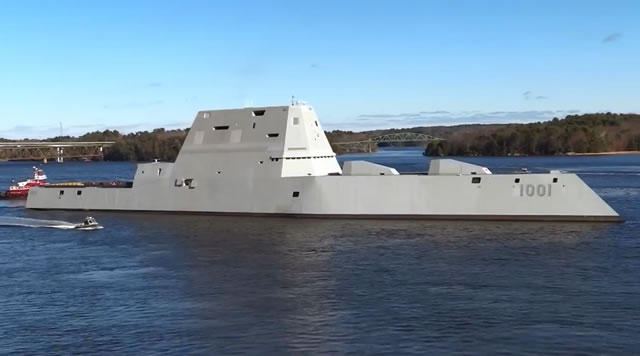 The second stealthy destroyer being built for the U.S. Navy cut short its first sea trials because an equipment failure prevented testing of propulsion and electrical systems under full power, officials said Friday.
The problem during builder trials was discovered Tuesday, a day after the future USS Michael Monsoor left Bath Iron Works, the U.S.Navy said.
The Monsoor returned to the shipyard under its own power Thursday and will return to sea after the problem is fixed, the Navy said. The repairs are not expected to impact the ship’s delivery in March.
The first-in-class Zumwalt experienced propulsion problems with seawater leaking into the system that have been repaired.
The Monsoor’s problem was electrical in nature, with the loss of an induction coil causing the failure of another system. The shipbuilder decided it would be more efficient to make the fix at the yard.
The third and final ship in the class is the Lyndon B. Johnson. It’s also under construction at Bath Iron Works.