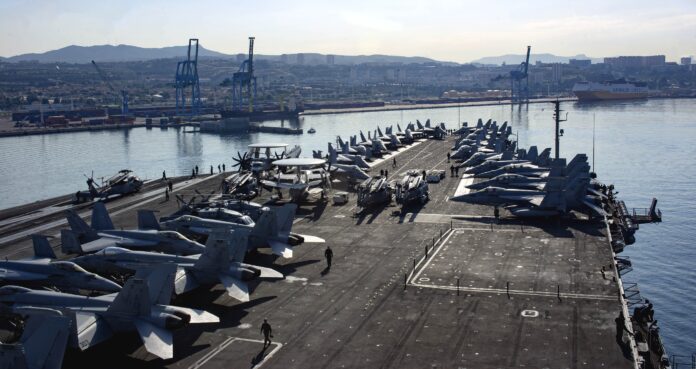 The Nimitz class aircraft carrier USS Harry S. Truman (CVN 75) arrived in Marseille, France, for a regularly scheduled port visit, June 21.
“We look forward to the opportunity to enhance U.S.-French relations during this visit,” said Commander, Carrier Strike Group 8 Rear Adm. Gene Black. “France is our oldest ally. This visit reinforces our common goals for a stable, secure and prosperous Europe, as well as allowing our Sailors and our hosts in Marseille to gain a greater understanding and cultural appreciation for one another.”
During the port visit, Truman Sailors will have the opportunity to take part in cultural and sightseeing events, and the ship will also host a reception for approximately 350 guests and crewmembers.
“We’re honored that France is hosting us during this deployment, and we’re grateful to the French people for this amazing opportunity to foster stronger relationships between our nations,” said Truman’s Commanding Officer Capt. Nicholas Dienna. “I expect that all of our Sailors will really enjoy this port visit, and my hope is that that they will leave Marseille and France with a great impression of USS Harry S. Truman and America’s Navy.”
The Harry S. Truman Carrier Strike Group has been operating alongside allies and partners in the U.S. 6th Fleet area of responsibility and conducting precision strikes on ISIS targets in support of Operation Inherent Resolve from the Eastern Mediterranean Sea, demonstrating the U.S.’ continued commitment to furthering stability, security and prosperity in the region.