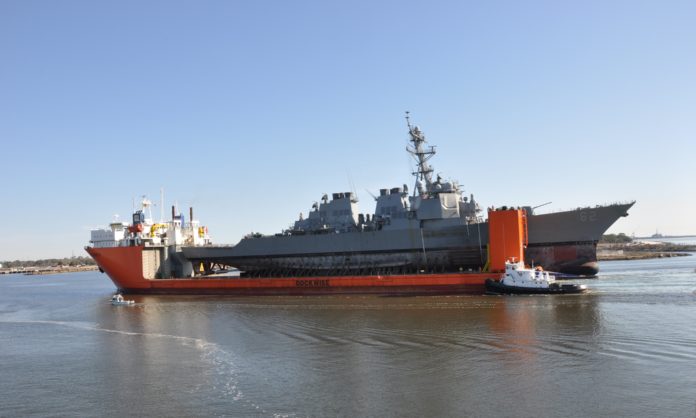 The Arleigh Burke-class guided missile destroyer USS Fitzgerald (DDG 62) arrived in Pascagoula, Mississippi, Jan. 19, aboard heavy lift vessel MV Transshelf inward bound from Yokosuka, Japan.
Fitzgerald is expected to spend several days in the Port of Pascagoula as the heavy lift ship will commence the reverse operation of unfastening, lowering and guiding the ship off the platform. The ship will then be taken to its designated pier space at Huntington Ingalls Industries shipyard.
Due to the extent and complexity of the restoration, both repair and new construction procedures will be used to accomplish the restoration and modernization efforts. Various Hull Mechanical and Electrical (HM&E); Command, Control, Communications, Computers and Intelligence; and Combat System equipment, including the electronic warfare suite, radar, switchboard, gas turbine generator and air condition plant, require repair and/or replacement. Fitzgerald will also receive HM&E; Combat System; and Command, Control, Communications, Computers, Collaboration and Intelligence; upgrades that were originally planned for installation during a fiscal year 2019 availability.
Work on the ship is expected to occur on a land level facility throughout 2018 and one to two quarters of 2019, followed by an extensive test and trials period to ensure all systems and spaces are restored to full functionality and operational capability. The entire restoration and modernization effort is expected to complete approximately 24-months post work commencement on the ship.
Fitzgerald was involved in a collision with the Philippine-flagged ACX Crystal June 17. Seven Sailors lost their lives and the ship was damaged on the starboard side above and below the waterline. The U.S. Navy released a comprehensive review of the incident Nov. 1.