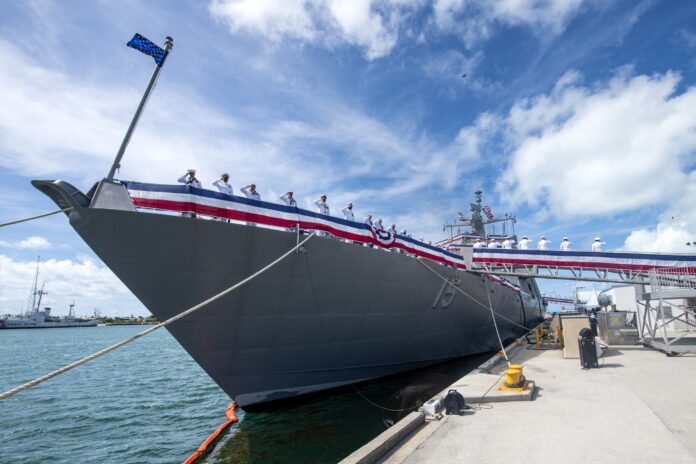 The ceremony is witnessed emotional moments. Because Billings is the first ship in the U.S. Navy to be named after the largest city in Montana. She sails with the motto, “Big Sky over Troubled Waters.”

“This privilege is not lost on me,” said Cmdr. Nathan Rowan, commanding officer of Billings. “I am humbled by it and hope to exceed expectations in my remaining time with the Billings setting the tone for a safe, successful, and sustained legacy for this ship and all who will serve aboard her.”

“Billings was designed to operate and adapt to a rapidly changing environment,” said Joe DePietro, vice president of Small Combatants and Ship Systems at Lockheed Martin. “She is equipped and ready for today’s threats and easily modifiable to meet the threats we may not even be aware of yet. Our team is confident Billings will be what the Navy needs when the fleet needs it.”

Billings has a crew of approximately 70 Sailors, and is designed to operate near the shore and in the open ocean. This provides cost-effective force flexibility and allows the Navy to strengthen allied partnerships.

“A warship and its crew is better when they are ambassadors, better when they put a hand out—a hand of friendship, a hand of comfort, reassurance. But make no mistake, they can bring it. They’ve got power and they can fight,” said Adm. Craig S. Faller, Commander, U.S. Southern Command. “Billings is fast. It’s lethal. It can fight, and so can its crew.”

Watercraft Launch and Recovery: Up to Sea State 4

Aircraft Launch and Recovery: Up to Sea State 5