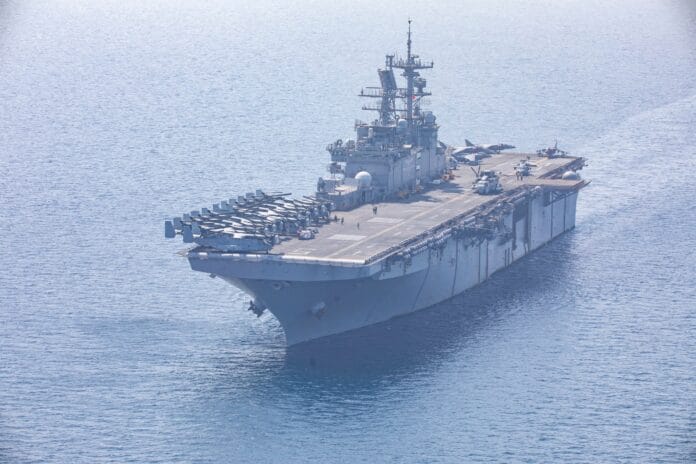 The Bataan Amphibious Ready Group (ARG) and embarked 26th Marine Expeditionary Unit (MEU) are returning from deployment this month, marking the end of a seven-month deployment to the U.S. 2nd, 5th and 6th Fleet areas of operation.

“Big 5’s crew is tough and resilient and I could not be more proud of these Sailors and Marines – the men and women of Bataan,” said Capt. Bryan Carmichael, Bataan’s commanding officer. “We’ve supported commanders in U.S. 5th, 6th, and 2nd Fleets, improved coalition partnerships, and deterred aggression everywhere in between. It’s good to be home and it is my honor to serve as Bataan’s commanding officer as we are ready and excited to execute the next phase of Bataan’s legacy.”

The MEU departed the ARG ships and returned to Camp Lejeune, North Carolina earlier this month.

“As a ‘certain force in an uncertain world’ the 26th MEU was flexible, resilient, and adaptable while forward deployed to the U.S. 5th Fleet and 6th Fleet areas of operation,” said Col. Trevor Hall, commanding officer of the 26th MEU. “This deployment presented unique challenges, but the Navy-Marine Corps team prevailed and incessantly provided our fleet commanders with a responsive, sea-based Marine Air-Ground Task Force – even during the global novel coronavirus pandemic.”

The ARG ships and MEU departed for deployment from their respective home bases in December. Bataan remained at sea for more than 150 consecutive days before returning home.

“I am tremendously proud of what the Sailors and Marines of the Bataan Amphibious Ready Group and 26th Marine Expeditionary Unit accomplished during this deployment. Our team worked tirelessly to remain fully mission-ready during the unprecedented challenge of a global pandemic,” said Capt. Lance Lesher, who served as commander of Amphibious Squadron (PHIBRON) 8 through its pre-deployment workup cycle and deployment until conducting a change of command at sea, July 12.

Lesher turned over command of PHIBRON 8 to Capt. Jason Rimmer during a change of command ceremony at sea onboard Bataan in the Atlantic Ocean.

“It has been inspiring to get to know the Sailors and Marines of the ARG-MEU team in recent days and I am incredibly impressed by what this group of hardworking men and women has been able to accomplish on this challenging deployment,” said Rimmer. “Our families, friends and loved ones at home should be proud not only of the Sailors and Marines who deployed, but of their own service as well,” he continued. “Their love, support and watch over the homefront over the course of the last seven months has given our ARG-MEU team the strength and confidence it has needed to stay focused and ready to carry out any mission our nation has asked of it.”

While in the U.S. 5th Fleet area of operations, the Bataan ARG and 26th MEU remained healthy and fully mission ready while working with regional partners. The Blue-Green team worked with partners from the Kingdom of Saudi Arabia to coordinate multiple complex training evolutions on the uninhabited Karan and Kurayn islands in the Arabian Gulf, as well as with partners from the United Arab Emirates to hold training in an isolated location within that country.

While in the U.S. 6th Fleet area of operations, Bataan increased interoperability with regional allies and partners by conducting maneuvering operations and at-sea exercises with navy ships from France and Italy during their time in the Mediterranean Sea.

The Sailors and Marines of the ARG-MEU also strengthened international partnerships by hosting the head of the Royal Jordanian Navy and deputy commander of Kuwait Naval Forces aboard Bataan in separate visits that reinforced shared goals and fostered personal relationships.

There are more than 4,000 Sailors and Marines assigned to the units of the ARG-MEU, nearly 2,500 of which were aboard the Bataan.

ARG-MEUs operate continuously across the globe and provide the geographic combatant commanders with a forward-deployed, flexible and responsive sea-based Marine Air Ground Task Force. The blue-green team is fully capable of conducting operations across a full spectrum of conventional, unconventional and hybrid warfare.

Check out the Naval Library App to find out the specifications of the US Navy Vessels.