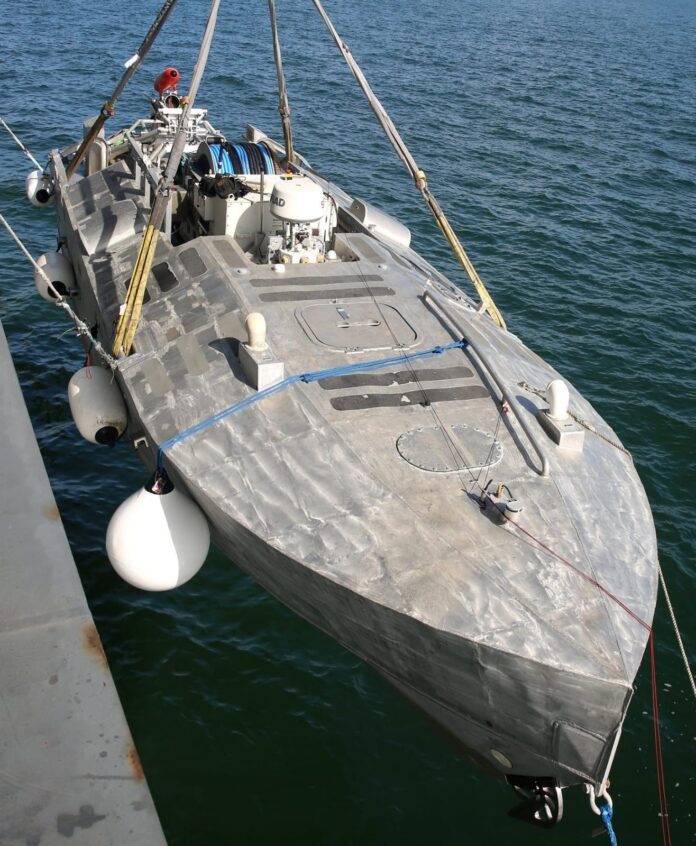 After announcing world’s largest autonomous warship against submarines, this week, the Pentagon announced that they had reached yet another major milestone in aquatic drone warfare, using a combination of two unmanned systems to clear an underwater minefield.

According to the Navy, they recently completed a “single-sortie mine hunting” mission. The mission set entailed deploying one autonomous boat equipped with sonar to detect mine-like objects in the water. Once it identified what it believed to be a mine, the boat then deployed a secondary autonomous system tasked with closing with and destroying the mine. Traditionally, this arduous and incredible dangerous task has been left to highly trained divers, but by utilizing complimentary drone systems, the Navy now believes it can finally pull the men “our of the minefield.”

“That single-sortied, detect-to-engage was a great example of something that would represent supervisory [control of unmanned systems],” explained Stephen Olson, the Deputy Branch Head for the Navy’s Mine Warfare effort. “It was a small group [of people] who oversaw the entire effort: Multiple systems were in operation together, working together and cueing each other.”

Removing human divers from the minefield offers a number of distinct advantages in addition to limiting the risk to sailor’s lives. Theoretically, a machine could locate and engage mines at a faster rate of speed than human divers could (and potentially for less money). It also allows far fewer sailors to be involved in the mine clearing effort, freeing up manpower for other operations.

“If you are familiar with mine warfare, it’s painfully slow,” Olson at the DSEI conference in London this week. “When leadership says, ‘We need to clear a minefield,’ and you say, ‘How long do I have?’ they look at their watch when they should pull out a calendar. I’m going to tell them it is going to take weeks, and they’re going to say: ‘I need it done now.’ ”

While the success of the Navy’s mine-clearing robot is a big step in the right direction, it’s hard to say just how big. Despite announcing their achievement, the Navy is unwilling to offer any further information regarding the effort, including how far these autonomous systems may be from operational use.