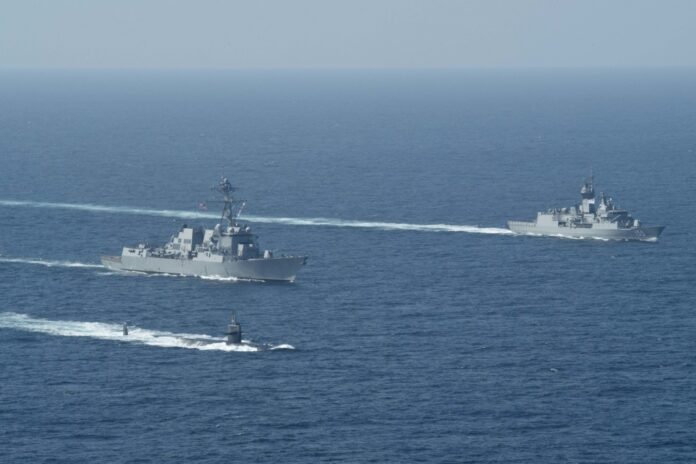 Three submarines joined 7th Fleet ships and aircraft this week during a joint advanced warfighting training exercise on May 2-8 in the Philippine Sea.

The submarines participated in a variety of events alongside U.S. Navy surface ships and reconnaissance and surveillance aircraft.

“A key element to our collective success is our ability to employ undersea warfare capabilities in support of multiple missions,” said Rear Adm. Jimmy Pitts, Commander, Submarine Group Seven (CSG7). “This is a Navy-wide effort, and as this exercise demonstrates, every 7th Fleet Task Force is fully invested in testing and improving our cross-community coordination. The seamless, unified operations between our warfare communities demonstrate a strength and professionalism that is only possible because of our routine training and engagement.”

“This exercise was an opportunity for our submariners to gain proficiency and experience leveraging the combined tactical strength of our various task force units,” said Lt. Cmdr. Jess Feldon, CSG7 Deputy Chief of Staff, Plans, Operations and Engagements. “Throughout the exercise, we engaged in constructive dialogue with our counterparts in the air, on land and at sea. These discussions directly contribute to improving how we prepare and train future submarine crews for operations in the Indo-Pacific.”

The participating forces exercised a wide range of capabilities and demonstrated the inherent flexibility of the integrated forces. These capabilities range from maritime security operations to more complex subsurface and surface combatant scenarios. Overall, the exercise served to further demonstrate regional capabilities as well, and provide layered approach to protecting U.S. and partner nations’ interests.