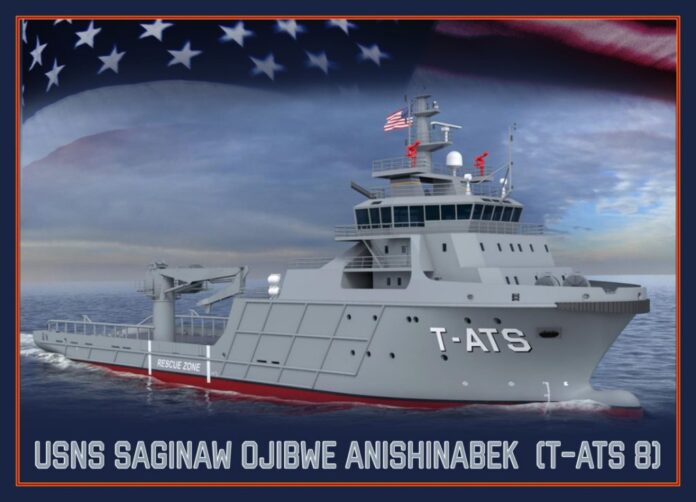 According to the announcment of the U.S.Navy Secretary, Richard V. Spencer, the third unit in the US Navy’s new class of towing, salvage, and rescue ships will be named Saginaw Ojibwe Anishinabek in honor of the history, service and contributions of the Saginaw Chippewa Indian Tribe of Michigan.

The Saginaw Chippewa people are from Saginaw, Black River, and Swan Creek bands. Ojibwe is also referred to as Chippewa and Anishinabek means “original people.”

“I am deeply honored to announce that the history of the Saginaw Chippewa people will once again be part of Navy and Marine Corps history,” said Spencer. “The future USNS Saginaw Ojibwe Anishinabek honors the original people of modern day Michigan, with their original name, and will carry the proud Ojibwe legacy for decades to come.”

This is the first ship to bear the name Saginaw Ojibwe Anishinabek, and the fifth U.S. ship to be named in honor of Native American nations.

The Navajo class T-ATS, Towing and Salvage ships are in procurement to replace the Powhatan Class T-ATF Fleet Tugs and Safeguard class T-ARS Rescue and Salvage vessels. The projected delivery is in FY 2021, with two more delivering in FY 2022 and one per year through FY2025. They will serve as open ocean towing vessels and will additionally support salvage operations and submarine rescue missions.