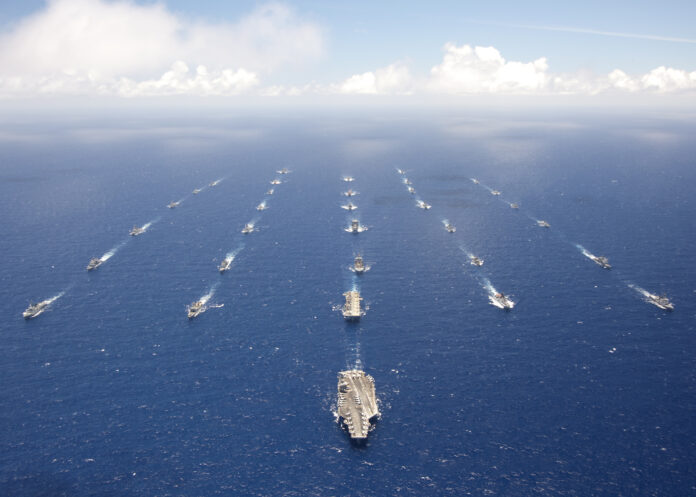 Twenty-six nations, 47 surface ships, five submarines, 18 national land forces, and more than 200 aircraft and 25,000 personnel will participate in the biennial Rim of the Pacific (RIMPAC) exercise scheduled June 27 to Aug. 2, in and around the Hawaiian Islands and Southern California.
As the world’s largest international maritime exercise, RIMPAC provides a unique training opportunity designed to foster and sustain cooperative relationships that are critical to ensuring the safety of sea lanes and security on the world’s interconnected oceans. RIMPAC 2018 is the 26th exercise in the series that began in 1971.
This year’s exercise includes forces from Australia, Brazil, Brunei, Canada, Chile, Colombia, France, Germany, India, Indonesia, Israel, Japan, Malaysia, Mexico, Netherlands, New Zealand, Peru, the Republic of Korea, the Republic of the Philippines, Singapore, Sri Lanka, Thailand, Tonga, the United Kingdom, the United States and Vietnam.
This is the first time Brazil, Israel, Sri Lanka and Vietnam are participating in RIMPAC. Additional firsts include New Zealand serving as sea combat commander and Chile serving as combined force maritime component commander. This is the first time a non-founding RIMPAC nation (Chile) will hold a component commander leadership position.  This year will also feature live firing of a Long Range Anti-Ship Missile (LRASM) from a U.S. Air Force aircraft, surface to ship missiles by the Japan Ground Self-Defense Force, and a Naval Strike Missile (NSM) from a launcher on the back of a Palletized Load System (PLS) by the U.S. Army. This marks the first time a land based unit will participate in the live fire event during RIMPAC. RIMPAC 18 will also include international band engagements and highlight fleet innovation during an Innovation Fair.