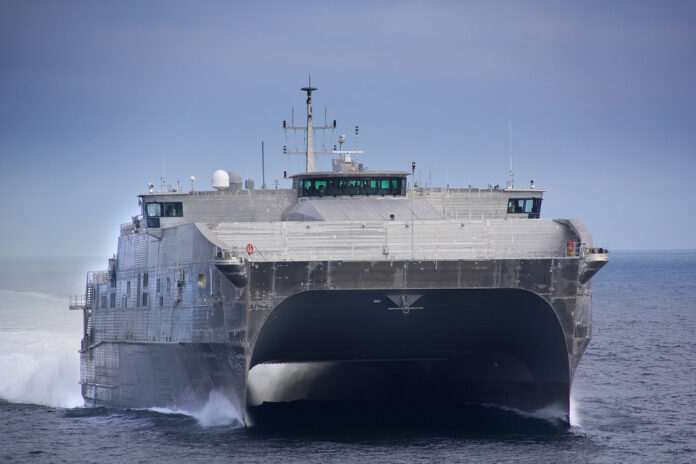 The U.S. Navy accepted delivery of its ninth Expeditionary Fast Transport (EPF) vessel, USNS City of Bismarck (EPF 9), Dec 19.
EPFs are shallow draft, all aluminum, commercial-based catamarans that are capable of intra-theater personnel and cargo transport which provide combatant commanders high-speed sealift mobility. EPFs enable rapid projection, agile maneuver and transport of personnel, equipment and supplies over operational distances with access to austere and degraded offload points.
As versatile, non-combatant vessels, EPFs provide increased operational flexibility for a wide range of activities including maneuver and sustainment, relief operations and flexible logistics support. These vessels are capable of interfacing with roll-on/roll-off discharge facilities and on/off-loading a combat-loaded Abrams Main Battle Tank. The EPFs include a flight deck to support day and night aircraft launch and recovery operations and airline-style seating for 312 embarked forces with fixed berthing for 104. City of Bismarck will be owned and operated by the Military Sealift Command.
City of Bismarck was constructed by Austal USA which is currently under contract for the construction of three additional EPFs. Burlington (EPF 10) held its keel laying ceremony in September 2017. Additionally, Puerto Rico (EPF 11) and EPF 12 were awarded in September 2016 and are currently in the early stages of production.