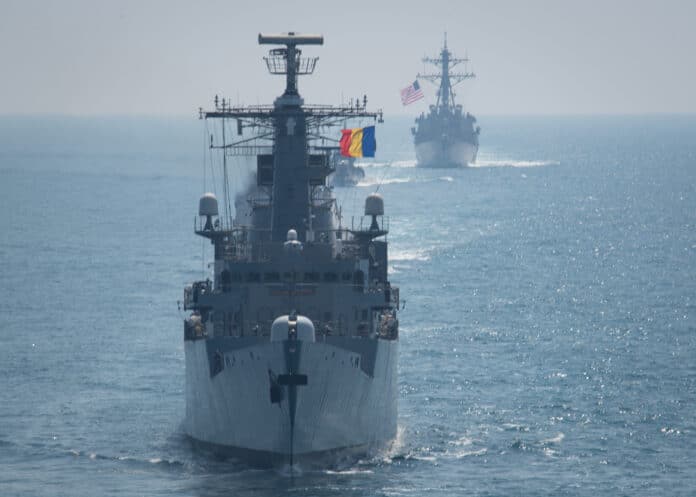 “Constant and consistent presence of NATO ships in the Black Sea, during exercises, boosts our demonstration to maintain a safe and open Black Sea,” said Romanian Rear Adm. Mihai Panait, Romanian Fleet Commander. “Having that in mind, we see our strategic partner, the U.S. Navy, as a bond between our navies, NATO Allies and partners in the region. The Romanian-American cooperation becomes a tradition for naval diplomacy and a concrete manifestation of Allied solidarity aimed at strengthening the stability along the Alliance’s borders.”

“It’s been a pleasure operating alongside our NATO [Allies] in the Black Sea while demonstrating our commitment to stability and security in the region,” said Cmdr. Craig Trent, commanding officer of Porter. “It’s important to have these opportunities to train alongside our partners and continue building readiness.”

Oak Hill is deployed as a member of the Bataan Amphibious Ready Group along with amphibious assault ship USS Bataan (LHD 5) and amphibious transport dock ship USS New York (LPD 21), which are operating in the Mediterranean Sea in support of U.S. 6th Fleet. Oak Hill’s presence in the Black Sea marks the fourth visit by a U.S. Navy ship this year.

The U.S. Navy routinely operates in the Black Sea consistent with international law, including the Montreux Convention. Training with allies and partners is frequently conducted in order to increase capacity and capability to strengthen regional ties.

Porter recently conducted operations with partner nations throughout various European Seas, including at-sea training with the Romanian Navy in the Black Sea in April; joint interoperability exercises with the Italian and French navies in the Mediterranean Sea in April; operating as part of a Surface Action Group with the Royal Navy in the High North and Barents Sea in May; and conducting passing exercises with the Tunisian Navy in June.

U.S. 6th Fleet, headquartered in Naples, Italy, conducts the full spectrum of joint and naval operations, often in concert with allied and interagency partners, in order to advance U.S. national interests and security and stability in Europe and Africa.