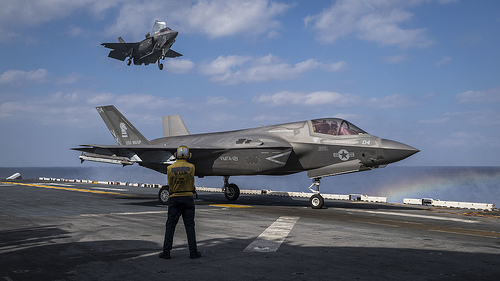 “It’s great getting out to sea with my counterpart, Vice Adm. Yamashita.” Sawyer said. “Our forces work together closely every day and I look forward to seeing that partnership expand with new capabilities, like F-35B.”

The Japan Self-Defense Force has been working with the U.S. Navy and Marine Corps to develop greater amphibious capabilities as part of the newly-established Japan Ground Self-Defense Force, Amphibious Rapid Deployment Brigade (ARDB).

Wasp, flagship of the Wasp ARG, with embarked 31st MEU, is operating in the Indo-Pacific region.