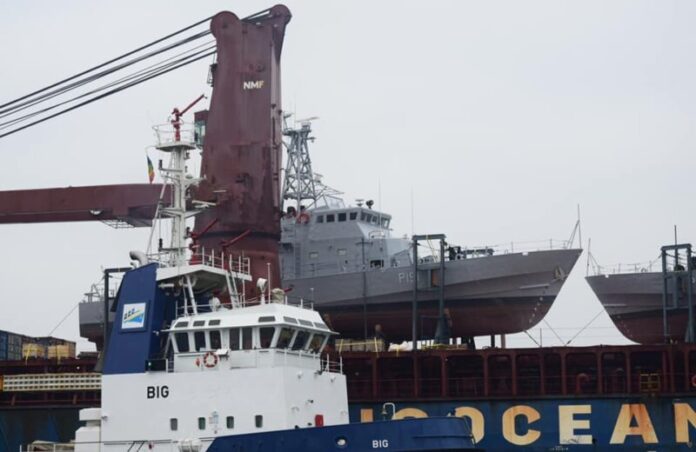 Two Island-class patrol boats given to the Ukrainian Navy as part of non-paid military assistance from the United States have finally arrived in Ukrainian shores as part of a program to beef up Ukraine’s navy with retired U.S. vessels. Ukrainian Navy’s new Patrol Boats, P191 Starobilsk and P190 Sloviansk transported to Odesa on board a cargo ship on 21st October.

The boats’ transfer to Ukraine’s navy was reportedly delayed by the Poroshenko administration since 2014 to protect defense contracts given to the Kuznya Na Rubalskomy, a Kyiv-based shipyard owned by the former president.

The two Island-class boats, formerly operated by the U.S. Coast Guard (US Coast Guard as USCGC Drummond WPB1323 and USCGC Cushing WPB1321.), have been given names in honor of two Ukrainian cities in Donbas: R190 Slovyansk (after the city in Donetsk Oblast, the site of the first major battle in Russia’s war in the region) and R191 Starobilsk (after a city in Luhansk Oblast 380 kilometers southeast of Kyiv)

Slovyansk and Starobilsk are capable of reaching speeds up to 29.5 knots (54 kilometers per hour) and hold crews up to 18 members, including three officers.

With the U.S. Coast Guard, Slovyansk participated in a number of operations in the Gulf of Mexico and the Carribean Sea, including search and rescue missions, interdiction of illegal migrants and drug smugglers and law enforcement at fisheries.

Ukraine accepted the American boats in 2014, when the Pentagon reportedly suggested that the vessels be handed over under the Excess Defense Article Program (EDAP) to bolster Ukraine’s dwindling navy, which had lost nearly 80% of its power in Russia’s annexation of Crimea.

In late March 2018, the Schemes journalism project revealed the proposal from Washington and that the transfer had remained stalled for four years amid bureaucratic hurdles in the Ukrainian government.