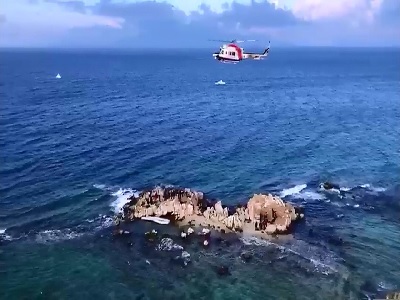 Dozens of migrants were rescued by the Turkish Coast Guard on Thursday (14 Dec) after their rubber dinghy snagged on a rocky outcropping off Turkey’s Aegean coast.

In a rescue recorded by the Turkish authorities, a helicopter winched people to safety near Bademli, on the coast near the Dikili-Izmir. A partly deflated dinghy could be seen on the rocks.

Fifty-one people, including 15 children, were rescued, six by helicopter and the rest by fishermen who transferred them to coast guard vessels, according to a statement from the coast guard.

The nationalities of the rescued migrants were not immediately clear. The route across the Aegean Sea from Turkey to Greece has often been deadly. Dozens of migrants have drowned attempting the Aegean crossing this year.

And while it has been more than two years since an unprecedented number of refugees and migrants made their way to Europe, driven in large part by the war in Syria, European Union member states have struggled to devise a unified system for dealing with the humanitarian crisis. The bloc has disagreed on how to provide aid and resources for migrants, and argued about quotas for the union’s 28 member states.

While a European Union arrangement with Turkey has largely shut down the once well-traveled route across the Aegean, the rescue on Thursday was a reminder that some are still making the journey.