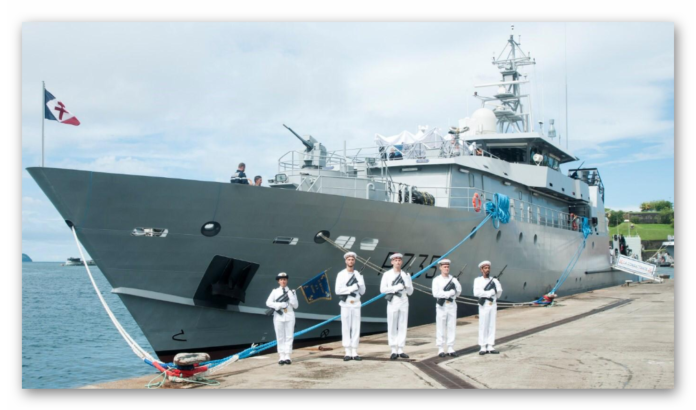 According to the announcement of French Minister of the Armed Forces Florence Parly 18 October via Twitter, The French Navy (Marine Nationale) has commissioned its third La Confiance-class offshore patrol vessel (OPV), La Combattante (P-735) into service.

The OPV was ordered in December 2017 in the aftermath of Hurricane Irma to reinforce the French Armed Forces capabilities in the West Indies, was commissioned on 2 October.

The OPV arrived in Martinique in August, sea trials were conducted while passing the Atlantic, ship’s endurance was tested in tropical conditions.

The three La Confiance vessels have been designed by naval architecture (Thanks to a draft of 3.2 meters) company Mauric for operations in littoral waters.

As part of the “Horizon Marine 2025” modernization plan of the French Navy, first two OPVs are set to replace, from 2017, the existing P400 patrol vessels based in Guyana: La Capricieuse and La Gracieuse. The OPVs are able to accommodate 14 people (special forces for example) in addition to 24 crew members. With a length of 60 m and a width of 9.50 m, a draft less than 3.2 meters, the vessel is able to operate in shallow waters including the Kourou river. The patrol vessels can reach speeds of 21 knots with an endurance of 12 days at 12 knots.

OPVs have two shaft lines, the propelling power will be about 6 MW, capable of crossing at least 3500 NM at 12 knots. The weapon stations for secondary weapons are able to receive a choice of small-calibre machine guns of 12.7 mm or 7.62 mm. OPVs are also equipped with water cannon. (A Nexter Narwhal 20mm RWS is fitted at the bow).

There are two on-board RHIBs (Rigid Hull Inflatable Boat). They have an aluminium hull and a length of about eight meters. OPVs have sensor systems (radars, projectors, optronic system) enabling it to intervene at any time, day or night.

In addition to patrolling the French exclusive economic zone, the ships will also be protecting the Guiana Space Centre, a French and European spaceport located to the northwest of Kourou.