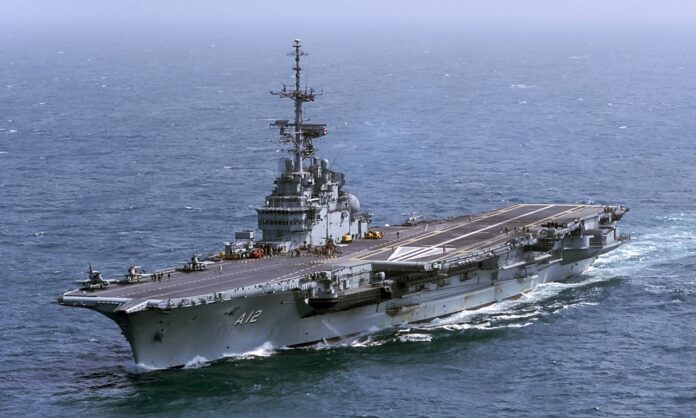 As we shared before, The Brazilian Ministry of Defense has announced on 23rd September that decommissioned aircraft carrier Sao Paulo has been on sale. She is at auction and who interested in buying the aircraft carrier São Paulo have to submit a proposal until December 9th to the Brazilian Naval Project Management Company (Emgepron), responsible for the event.

The minimum bid amount was announced as $ 5.3 million and the announcement restricts the final destination of the “only and exclusively Safe and Environmentally Proper Ship Recycling” vessel. That is, the end of the world’s fifth largest aircraft carrier will be the same as its predecessor: scrapping. To try to avoid this end for the ship, a civil society group has teamed up in an institution trying to convince the government to turn it into a floating museum.

According to the auction notice, after decomissioning, she’s not availible to be registered either port authority or maritime court, and also not safe for navigation, should only be destined for safe and environmentally sound recycling (scrap).

However, buying the ex-carrier to make a scrap may not be a profitable deal. Because the buyer of the ship will not be able to reuse spare parts, will have to bear the costs of removing the vessel. Another important issue is about environmental concerns. The ship has up to 1,000 tonnes of asbestos (a carcinogenic element), which prevents it from being wrecked and will oblige the buyer to carry out a delicate operation to remove the toxic material. The NGO Shipbreaking Platform, a coalition of international environmental organizations that fight against pollution and the preservation of the health of workers involved in ship breaking, sent a letter to the Brazilian Ministry of Environment requesting that the sale of São Paulo to ship breakdowns of the South Asia, such as India, which bought Minas Gerais because they lack the technology to do asbestos removal.

A group of former military personnel has been working together to ensure that the vessel would not have the same destiny as its predecessor: a “junkyard of ships” since she was decomissioned. “The idea is to create exhibition areas on the São Paulo deck, as well as restaurants, cinemas, offices and classrooms. According to the institute’s president, Emerson Miura, the proposal aims at preserving the historical heritage and cultural, educational and economic development, with the creation of 1,300 direct jobs.” they said.

We wonder about the destiny of the world’s 5th biggest ex-aircraft carrier. Her destiny seems to be a problem on the table, and we guess this issue will come to a solution at the end of the auction date.