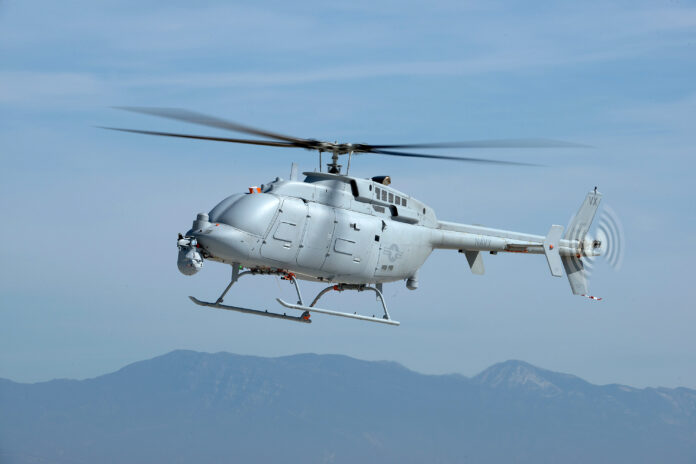 The U.S. Navy’s MQ-8C Fire Scout unmanned aerial vehicles will receive a new radar and datalink to set the UAV up as a forward spotter for the Navy’s surface fleet.
The Northrop Grumman-built UAV is set to be upgraded with a Leonardo Osprey 30 Active Electronically Scanned Array (AESA) radar and the Link 16 datalink, the combination of which will allow the UAV to distribute air-to-air and surface targeting information to ships in a surface action group.
As part of the Navy’s notional distributed maritime operations concept, Fire Scout being resident on a future frigate or Littoral Combat Ship could route targeting information from its AESA radars at ranges much further than the sensors on a surface ship but still within the range of weapons that could reach a surface target.
The Fire Scout will also be integrated with the Johns Hopkins-developed Minotaur Track Management and Mission Management system that combines information from several different sets of sensors to create a unified target picture for a battle group.
The platform is currently operating on the Navy’s Littoral Combat Ships and will be a key component of the upcoming next-generation frigate program (FFG(X)), according to the U.S.Navy in its submissions to industry on the requirements of the new ship.
The service has so far bought 30 MQ-8Cs for the LCS program.