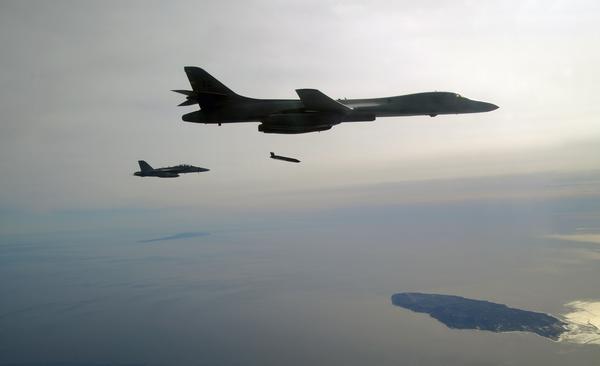 The U.S. Navy is closer to delivering its new Long Range Anti-Ship Missile (LRASM) after completing another milestone test flight from an Air Force  B-1B Lancer Dec. 8 over Point Mugu Sea Test Range in California.
During the test, aircrew aboard the B-1B simultaneously launched two missiles against multiple moving maritime targets for the first time.
“The completion of this test marks another significant accomplishment for the innovative team of government and industry professionals committed to fielding dominant surface warfare capability on an accelerated timeline,” said Capt.Todd Huber, LRASM program manager.
When operational, LRASM will provide flexible, long-range, advanced, anti-surface capability against high-threat maritime targets. It will play a significant role in ensuring military access to operate in open ocean and the littorals due to its enhanced ability to discriminate and conduct tactical engagements from extended ranges.
Early operational capability for the LRASM is slated for 2018 on the U.S. Air Force B-1 Lancer and 2019 on the U.S. Navy F/A-18E/F Super Hornet.