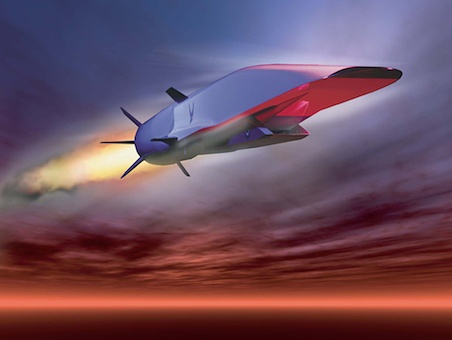 The U.S. Navy has conducted its first test of a new hypersonic missile.
The test was announced by Vice Adm. Terry Benedict, the director of the Strategic Systems Program (SSP), at the Naval Submarine League’s annual symposium in Arlington, Virginia, on November 2.
The test collected data on hypersonic boost-glide technologies and test-range performance for long-range atmospheric flight. This data will be used by the U.S.  Department of Defense to anchor ground testing, modeling, and simulation of hypersonic flight vehicle performance and is applicable to a range of possible Conventional Prompt Strike (CPS) concepts.
Hypersonic missiles are defined as those traveling at speeds between Mach 5 and Mach 10. That is, between 3,106 and 15,534 miles per hour, or one to five miles per second. China, Russia and the United States are all currently investing heavily in hypersonics, while a few other countries are also exploring the technology to a much lesser degree.
The are two basic types of hypersonic missiles. The first are called hypersonic glide vehicles (HGVs). HGVs are launched into the atmosphere from a rocket and glide to their targets at altitudes ranging from forty kilometers to higher than one hundred kilometers. These HGVs typically fly at faster speeds than the second type of hypersonic missiles, hypersonic cruise missiles (HCMs). As their name suggests, HCMs are cruise missiles that fly at hypersonic speeds. During their entire flight, they are powered by rockets or high-speed jet engines, like scramjets.