navalpost
Home Technology/Modernization The supply tanker “Academician Pashin” is ready to enter service for the... 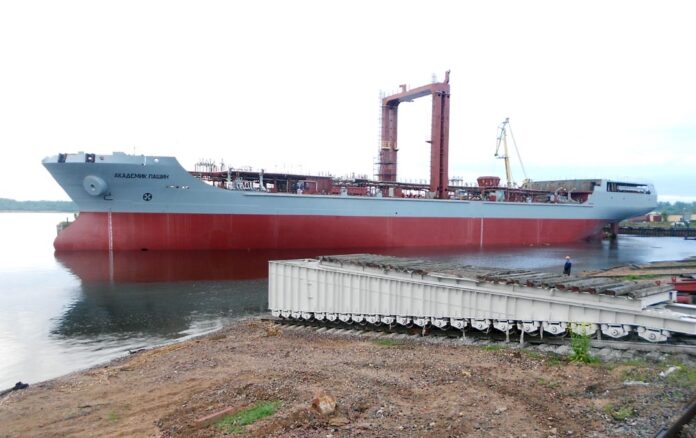 The new sea tanker Academician Pashin has successfully completed its trials and the vessel is ready to join the Northern Fleet’s logistics and rear support forces, the Fleet’s press office reported on Wednesday (25th Dec).

“On December 30, a solemn ceremony of hoisting the flag of the Navy’s auxiliary fleet will take place aboard the vessel at the Northern Fleet’s main base of Severomorsk,” the press office said in a statement.

The Project 23130 medium-sized sea-going supply tanker Academician Pashin has been built at the Nevsky Shipyard on order from Russia’s Defense Ministry. The tanker is equipped with a diesel single-shaft propulsion unit and a bow thruster and is an Arc4 ice-class vessel. The crew and passenger rooms and the service premises are located in the aft-end living superstructure.

The medium-sized tanker, Academician Pashin incorporates a steel hull with Arc 4 class ice strengthening. The ship has an overall length of 130m, a breadth of 21m, a maximum draught of 7m, and deadweight of 9,000t at maximum draught. The displacement of the ship will be approximately 14,000t.

The vessel will be outfitted and equipped for year-round operations, and will independently sail without limitation in area according to the rules specified in the Russian Maritime Register of Shipping. The replenishment tanker, which will sail to a maximum range of approximately 8,000 nautical miles, is designed to sail at a speed of 16k and offer an endurance of 60 days.

Academician Pashin will provide logistical and replenishment support at sea to the Russian Navy’s fleet of ships, including surface ships and submarines. The tanker will be outfitted to provide accommodation for up to 24 crew members. The tanker will carry diesel fuel, fuel oil, aviation fuel, motor oil and water, besides food and dry cargo, and can conduct replenishment at sea (RAS) missions with other ships.

The replenishment ship is equipped with a single-shaft propulsion system powered by diesel engines, and a bow thruster will provide manoeuvrability in narrow canals and waterways. The vessel will also be fitted with mechanical automation systems for ensuring safety and reducing the workload of the crew.